Stories of mothers taking young boys and teenagers into women’s only toilets and change rooms have provoked fierce debate in China.

A claim that some mothers in China take their sons, some of whom are teenagers, into female bathrooms and change rooms has sparked heated discussion online.

Many people have commented that they have had similar experiences with young men and boys in public female changing rooms and toilets.

The online debate blew up after a popular female rights blogger shared a complaint from another woman earlier this week that several mothers often brought their sons, aged 10 and above, to use the women’s bathroom at her community swimming pool. The boys even showered with their mothers according to the complaint.

The woman said she was once gawked at by one of the boys which made her feel angry and humiliated. When she complained to the swimming pool staff she was told that the boy was “too young” and they could do nothing to “discipline” him.

The boy’s mother said “kids don’t understand” and went on to mock her by saying “only you are so precious that you can’t be stared at”.

The woman did not have a picture of the incident but said it was an ongoing issue. The name of the swimming centre was not revealed to protect the identity of the boy.

However, the blogger who published the incident shared a picture of a different boy, aged 7, wearing nothing but underpants in the female bathroom at a sports park in Nanyang, Henan. The photo went viral on Weibo last year.

Experts said the behaviour exposes the lack of sex and gender education in China where many parents do not see an issue in mixing the use of gendered bathrooms and the children are too young to understand.

In China, gender education is a subtopic of sex education but there was until recently no standard curriculum for teaching it, which means it falls on parents to discuss the subject with their children.

“This kind of phenomenon with children being brought to the locker room or toilets of the children’s opposite sex has existed for a long time. The parents think it’s fine as they see there is no harm in doing this,” Lin Xiyuan, a teacher from Shenzhen-based Shan Jie Tong Zhen child sex education institution, told the South China Morning Post.

“Since China had no systematic sex education before, it is parents that taught kids gender knowledge while gender education receives little attention within families.”

“Those mothers are shameless. They don’t know what a shame it is!” wrote one user on Weibo.

“I suggest this sister reply to that mother: ‘if you are not afraid of being looked at, why not take a bath in a public hall? Why not take your son together to use the male bathroom?” one person commented on news portal sina.com.cn.

Another woman said on Weibo that she successfully stopped two mothers from bringing their sons, at least six years old, into a gym’s female locker room again after quarrelling with them and repeatedly filing complaints with the gym’s managers. “Being tough is useful as there is no tolerance on this point,” she wrote.

A male user said he met with a father taking his daughter to a public toilet. “I started to pee when they came in. How embarrassed I was!” he said.

In the majority of public facilities in China, there are signs saying boys of three years old or above entering the women’s bathroom or girls entering men’s bathrooms. However, it’s common for adults to ignore these signs.

Lin said people were increasingly aware of their right to privacy and space intended for a single-gender only.

“The new thing is that people have a rising awareness of their privacy and become sensitive on this front,” she said. “Previously, they put up with other genders’ using their sex-exclusive rooms; but now they can’t bear it anymore.” 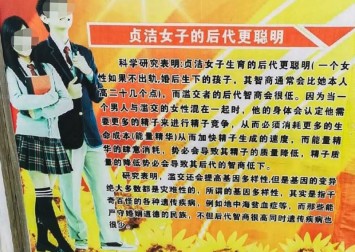 China’s revised Juveniles Protection Law, effective since this month, stipulates that kindergartens, primary and middle schools should carry out sex education that is “suitable for students’ ages”.

“The first unit of a comprehensive and scientific sex education system is gender education, teaching kids to know about their body and gender,” stated the new guidelines according to Lin.

Ta tala, an online influencer on gender issues, said she also received many messages from people who have encountered the opposite gender in bathrooms and toilets.

“For myself, I remember clearly when I was about six, I saw a boy of my age use our female bathhouse. This is the first time I saw the nude body of a male,” Ta said in a video on Weibo.

She said another reason for parents to accompany their children to the toilet of the children’s opposite gender is that there are few public toilets for a family to use.