Images depicting the interaction between the Sars-CoV-2 virus and CIPS. The red arrows indicate virus particles adhering to CIPS. Chinese researchers say their nanomaterial ‘serves as a trap for the virus.’ Photo: Nature Nanotechnology

A Chinese research team has developed a nanomaterial that can find Sars-CoV-2 viruses in a living cell and remove them.

Unlike most existing Covid-19 drugs, the material can inhibit infections from all major variants including Alpha, Beta, Delta and Omicron with high biosafety, the researchers said.

“It can be a promising therapy to fight the pandemic in the future,” said a researcher involved in the study who asked not to be named.

The findings were published in August in Nature Nanotechnology.

Nanomaterials are extremely small – a single nanometre is one billionth of a metre. The structure of the material – called CIPS because it is made of copper, indium, phosphorus and sulphur – takes the form of nanosheets that are about 200 nanometres, around the size of two viral particles.

CIPS, however, is capable of selectively binding with the virus’ spike protein, resulting in the infection process being blocked.

“It serves as a trap for the virus,” the National Centre for Nanoscience and Technology said on its website.

Once CIPS has captured the virus, it forms a stable complex. The complex is then recognised and eliminated by the host’s macrophages, large white blood cells in the human immune system that digest foreign substances. 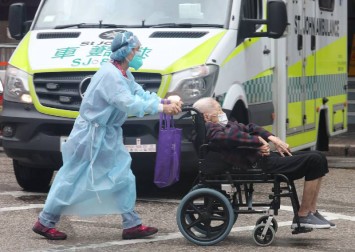 The effectiveness of current vaccines and antibodies being used against Sars-CoV-2 decline against variants like Omicron . While most antibodies are designed to bind with one single location on the virus, the mutation in Omicron variants may change the structure of the surface. CIPS can bind to multiple sites at the same time.

More than 1,000 new coronavirus mutant strains have been discovered so far. Though the Chinese team cannot test CIPS materials on all strains, they found CIPS were highly effective against all variants of concern – Alpha, Beta, Delta and Omicron.

Good biocompatibility is a prerequisite for the safe application of nanomaterial. Researchers studied the absorption, distribution, metabolism and excretion process of CIPS in mice and found the material had high biodegradability.

“Mice inhale CIPS through nasal drop and after seven days, it shows almost entire elimination of CIPS from the lung of mice,” the study said.

The biodegradability and biosafety of CIPS nanomaterials indicate it has good potential and application value, but it must still be tested through a series of clinical trials before it can be it ready for use in humans, the unnamed researcher said.

The good news is that the nanomaterials could be relatively cheap enough for mass production and widespread applications.

“The nanomaterial could be used as a decontamination agent or surface-coating material to reduce Sars-CoV-2 infectivity,” said the researcher.

ALSO READ: Omicron variant may have picked up a piece of common-cold virus