A handout photo. Shenzhen-based Donghai Airlines has suspended two staff after an altercation during a flight turned violent.

Chinese carrier Donghai Airlines on Sunday (March 7) said it had suspended a male pilot and a male flight attendant after allegations the pair assaulted each other during a flight.

The assault started from an argument 50 minutes from landing on the flight DZ6297 from Nantong to Xian on Feb 20, according to Chinese media reports.

The pilot, who was not identified, was using the bathroom when a first class cabin passenger wished to use the toilet. The pilot asked the passenger to wait at their seat, but was ignored by the passenger, according to social media posts about the incident.

The pilot saw the passenger still standing at the door when leaving the lavatory and rebuked the attendant who oversaw the first-class cabin for “not doing his job properly and affecting flying safety”.

The toilet argument soon spiralled out of hand and became physical, social media posts claimed this was initiated by the pilot. In the resulting fight the flight attendant’s arm was broken, while the pilot lost a tooth.

The flying attendant was not allowed to return on the same flight.

Donghai Airlines issued a statement on Sunday afternoon after the postings went viral on Weibo, confirming the assault and that the pair had been suspended from their job.

“The company attached high importance to the argument among the crew members during flight and conducted a strict internal verification. Those staff members involved have been suspended their job to ensure flight safety, ” the statement said.

The statement said the airline is conducting “an overall safety rectification” following the incident. 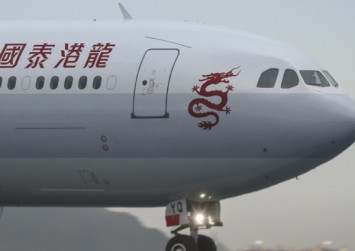 This is not the first time the Shenzhen-based airlines attracted public attention for the wrong reasons.

In July 2018, one of the airline’s pilots, identified only with the family name Chen, allowed his wife to be in his cockpit twice on two Chinese domestic flights.

The pilot had bought a ticket for his wife from Nantong to Zhengzhou, but then allowed her to stay on the plane all the way to Beijing. The airline did not say at what stage the woman was in the cockpit or how long she had spent there.

The company said at the time it would improve safety measures to prevent a similar incident from happening in the future.

In August 2018 another pilot for the airline, identified with only the family name Yang, drove a plane directly into the airfield for a flight from Shenzhen to Wuxi before preparation work was completed. The airline received a warning over the incident.