A photo posted by Zhu Xueying, an Olympic champion for China, appears to show a significant blemish on her gold medal.

A Chinese Olympic champion publicly criticised the quality of her gold medal on Monday (Aug 23) and posted photos online that appear to show it peeling.

Zhu Xueying, who won the trampoline gymnastics event , posted three photos on Weibo of the medal that appear to show an obvious deformity on the top left side.

She wrote: 'Can your medals … peel off too?' in the caption.

The Tokyo Olympic Committee told the nationalistic tabloid Global Times on Wednesday that the deformity was likely the result of a protective coating peeling and that, “Even if you remove the coating, it does not directly affect the medals’ quality”.

The Tokyo Organising Committee of the Olympic and Paralympic Games did not respond to an interview request from the South China Morning Post.

Wang Shun, who won a swimming gold medal in the 200-metre individual medley, briefly mentioned to a reporter that his medal was also peeling. That video also went viral on Weibo.

For her part, Zhu said she did not expect the post to go viral and cause such a stir.

In a video posted on Tuesday night, Zhu said she showed the medal to her coach, who found a smudge on it. They said they tried to wipe it, but the smear did not come off.

“I then tried to scratch it with my nails and found that it ‘peeled off’,” she said. “I sent out the first Weibo post to see if any other athletes had the same experience.”

But she said she wasn’t making a fuss over the medal’s apparently lousy quality, and she called for people to pay more attention to the efforts of the athletes behind the medals.

Nonetheless, her post went viral on Chinese social media, with more than 16,000 comments from people who found the situation either hilarious or surprising.

“We should ask mining companies to build you one out of pure gold,” said someone.

“Maybe Japan can give you a new one,” another said. 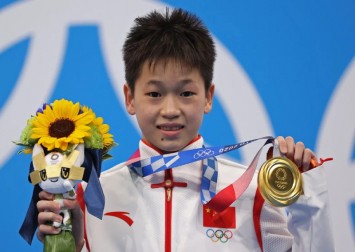 That person is not entirely on the wrong track. Because athletes lose their medals fairly regularly, the International Olympic Committee keeps moulds of all of the designs from the modern Games. According to The Wall Street Journal, the organisation will replace them once the athlete goes through a bureaucratic process and pays a fee.

The Tokyo 2020 medals were a new experiment as they were made from metal extracted from electronic devices, including mobile phones, donated by the Japanese public.

The devices’ gold, silver, and bronze elements were created through smelting, which involves heating and melting metal objects to extract a base metal.

The Tokyo Olympics website said that the gold medals weigh 556 grams. More than six grams of gold was plated on top of pure silver.

Previously, the Games’ official Twitter account teased athletes for pretending to eat their medals in a classic podium pose.

“We just want to officially confirm that the #Tokyo2020 medals are not edible!” Olympic organisers said in July.

“Our medals are made from material recycled from electronic devices donated by the Japanese public. So, you do not have to bite them … but we know you still will,” the account added.

A mayor in Japan created controversy for himself after he jokingly bit an athlete’s gold medal. The term “germ medal” started to trend on Japanese social media.

Olympic officials replaced the medal with an unvarnished one and the mayor said he would pay for the replacement.