Property mogul Thomas Kwok Ping-kwong walked out of Hong Kong's maximum-security Stanley Prison on Thursday morning, having served most of a five-year jail term for bribing the city's former No 2 government official.

The 67-year-old's son, Adam Kwok Kai-fai, was there to meet him as he walked free. He had with him a pineapple bun and milk tea, he said, the traditional Hong Kong treats being the first things his father wanted to eat and drink outside prison. The mogul's daughter, Noelle Kwok, and his younger brother Raymond Kwok Ping-luen were also there.

Wearing a black suit and a red tie, and with his hair greyed from its former thick black, Kwok was already waving at his family as he approached the prison gates. After crossing the threshold, he hugged his relatives.

Kwok was jailed in 2014 over a multimillion-dollar cash-for-favours scandal involving Rafael Hui Si-yan, Hong Kong's chief secretary between 2005 and 2007. Hui, also convicted on corruption charges, is serving a 7½-year jail term at the same prison.

But he was not in prison continuously from 2014. He gained temporary freedom when he was bailed pending appeal in July 2016, but was sent back to jail after losing his final appeal in June 2017. 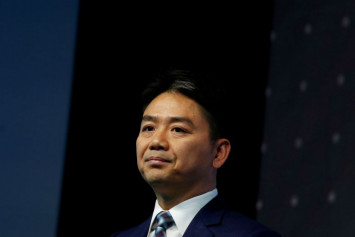 Speaking to reporters - about 100 of whom had turned out to see his release - he said: "My feeling is very special today. I feel very excited. I really couldn't sleep yesterday.

"I would like to thank God for going through the past 40 months in prison with me. It has been tough. Sometimes I was frustrated; I was anxious; I felt guilty. In different situations, God is always here to support me."

He thanked his son for running the company and his brother for taking care of the family. Raymond Kwok is the company's chairman and managing director, while Adam Kwok is an executive director.

The first thing he planned to, Thomas Kwok said, was to go home, adding that he wanted to hug his wife and tell her he was sorry. The family had also ordered dim sum, he said.

Kwok added that he had no plans to return to work, and intended to rest. He said things had changed over the past four years and he hoped to spend the coming nine months getting up to date on the market and international developments.

He also planned to pay his respects to his older brother Walter Kwok Ping-sheung, who died in October and whose ashes were at the family home.

A devout Christian, Thomas Kwok reportedly studied theology in prison, and wrote to his wife and children.

Earlier this month Raymond Kwok said there were no plans for Thomas to return to the company upon his release.

"[Thomas] would like to spend more time on church activities and other personal matters. He may also have plans to travel," Raymond said on the sidelines of the "two sessions" in Beijing, the annual meetings of the National People's Congress and Chinese People's Political Consultative Conference.

Also found guilty in connection with the case were former SHKP executive director Thomas Chan Kui-yuen and Francis Kwan Hung-sang, a former stock exchange official. The pair were found guilty of helping to funnel the bribes to Hui.

Kwan was freed last April after serving most of his five-year term, also having been released early for good behaviour. Chan, who was sentenced to six years' jail, was released last October after having his sentence commuted for health reasons.

The case came to light in 2008 when the Independent Commission Against Corruption received an anonymous letter accusing Thomas and his brother Raymond of providing Hui with rent-free accommodation at the luxury Leighton Hill residential block in Happy Valley.

After a 133-day trial in 2014 involving more than 120 witnesses, Hui was found guilty of conspiring to commit misconduct in public office after pocketing nearly HK$20 million (S$3 million) in bribes, including HK$8.5 million from Thomas through Chan and Kwan before he took office as chief secretary in 2005. Prosecutors said this made him "favourably disposed" to Thomas and SHKP.