Universal Studios’ new park in Beijing is facing a backlash after it announced the price of admission tickets, with some costing more than 700 yuan (S$145).

Jointly owned by the Beijing government and Comcast NBCUniversal, the 50 billion yuan (S$7.7 billion) resort in suburban Beijing opens on September 20 and will charge entry prices ranging from 418 yuan (US$64) in the low season to 748 yuan (US$115) during peak seasons, which includes some public holidays and most of the summer holiday period.

The pricing scheme, which the resort said is “in line with market conditions and industry practices”, has prompted complaints about being too expensive.

“Because most likely I’ll only have time to go on special days, such as the National Day holiday, this price does not work for me. It’s too expensive,” said one person on Weibo.

People also complained about the high price of food and entertainment in the park.

“I can accept the ticket price, but food and other stuff inside the park are so expensive that I can’t afford them,” another wrote.

Universal Beijing Resort, the biggest Universal Studios park in the world and two hotels, has taken two decades of planning and seven years of construction to complete, the company said earlier this week.

The park has been widely compared to Shanghai Disneyland , one of China’s most popular tourist destinations since it opened in 2016. 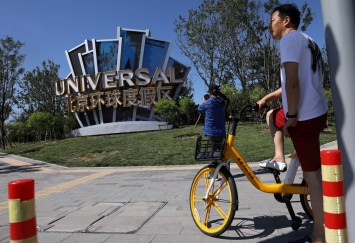 The park, located in the capital city’s Tongzhou district, started a trial launch for special guests from Wednesday.

Speculation about the trial tickets, which were not available to the general public, has been in the news since last month.

Tongzhou police announced late last month that four people were detained for illegally scalping the trial tickets for prices ranging from 1,000 yuan (US$154) to 5,000 yuan (US$773).

Over 10,000 residents and 463 companies were relocated to make way for the project, which now has two hotels and seven themed areas.

Talks between the Beijing government and the consortium behind the project started as early as 2001, but it was not until 2014 that central authorities finally approved it.