Hong Kong’s vaccination programme will extend its walk-in scheme to those aged 60 to 69 from Wednesday.

The Hong Kong University of Science and Technology (HKUST) has toughened its Covid-19 vaccination policy, telling unvaccinated and untested students they would not be allowed on campus, a move even a hardline public health expert said was "controversial".

Its change of approach differs drastically from previous requirements announced in May by other tertiary institutions, such as the University of Hong Kong, Chinese University, and Lingnan University, that only students living on campus would have to take a jab or face regular testing.

In an email sent on Monday (Aug 9), the university management said people who visited the Clear Water Bay campus regularly, such as students, staff, and university residents, including their family members and domestic helpers, and even frequent visitors and contractors, would have to get a jab or be tested every two weeks to obtain an Electronic Campus Access Pass starting from September.

Those concerned would also have to upload their vaccination or testing records to the university's online system. Only children under the age of 12 are exempt.

Last week, the government announced that key workers, such as airport and quarantine hotel staff would have to get vaccinated or lose their jobs. Civil servants, public hospital staff and care facility employees are also subject to the jab or test rule.

But Dr Leung Chi Chiu, a respiratory medicine specialist who has frequently called for the tightening of anti-pandemic rules, questioned the university's move.

"The Covid-19 vaccines have still only been approved for emergency use in Hong Kong, and there are some legitimate health concerns, especially for young people who are at a higher risk of having heart muscle inflammation due to vaccinations," he said.

Leung said a blanket policy risked depriving students of their educational rights, and suggested a partial one, such as only covering medical students who had to go onto wards and face patients, might be more measured.

HKU along with City and Baptist universities told the Post they encouraged students and teachers to get vaccinated, with the latter reiterating that students living in dorms would need to get vaccinated or prove they had been tested.

Meanwhile, the director of Macau's Health Bureau, Alvis Lo Lek Long, said on Monday that his city had completed a mass testing exercise with no positive cases of Covid-19 detected among more than 700,000 samples.

Hong Kong last week suspended a scheme allowing residents returning from Macau and other parts of mainland China to enter the city without quarantining in a bid to prevent the fresh Covid-19 outbreaks across the border from spreading to the city. Only neighbouring Guangdong was exempted from the suspension.

But Lo said a preliminary assessment suggested there were no infectious agents circulating in Macau, though he called for the public to stay vigilant against the coronavirus given its extended incubation period. 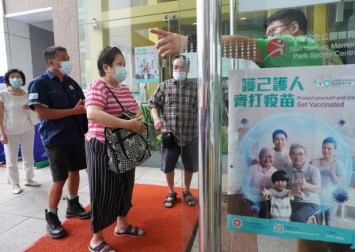 Macau had ordered all of its residents to take coronavirus tests last Wednesday after a family of four was diagnosed with the more infectious Delta strain.

Lo said the authorities would focus their investigations on those who had been in contact with the four confirmed cases, and extend quarantine orders to the relevant people.

Monday also saw Hong Kong health officials extend walk-in Covid-19 vaccinations to those aged 60 to 69 from Wednesday in the latest bid to push the city towards herd immunity.

The government revealed that 4,600 passes would be made available to members of the age group every day at 7.45am across the city's 24 inoculation centres.

The move comes just two weeks after the same offer was made to those aged 70 and above. More than 13,800 residents have taken advantage since, with daily uptake hovering at about 1,000 to 2,000.

"The elderly are the group with the highest risk of complications and death from Covid-19," a government spokesman said, adding vaccines were "highly recommended" for older residents as protection against infection.

Experts previously predicted that walk-ins, which eliminate the need for online booking, would help boost vaccination rates among the elderly.

Hong Kong confirmed two new Covid-19 infections on Monday, imported cases from Romania and Russia. Both were asymptomatic, with one having been fully vaccinated. The new arrivals take the city's infection tally to 12,015, with 212 related deaths.

After a sluggish start, Hong Kong's inoculation programme has now administered more than 6.2 million Covid-19 jabs in total. That means 3.5 million people - amounting to 52 per cent of those aged 12 and above, or 46.7 per cent of the population as a whole - have received at least one shot of a coronavirus vaccine.

Ministers have repeatedly said a full border reopening with the mainland hinged on local vaccination rates, with the 70 per cent mark touted by health experts and some officials as a target.

The government last week confirmed that the city's Covid-19 vaccination centres would remain open through October. Ministers have expressed hope that with an average 30,000 jabs being administered a day, 70 per cent of residents will have received at least their first shot by late September.

Among a raft of new steps aimed at boosting vaccination rates last week was a requirement that civil servants be jabbed by the end of August or face regular testing to take place on their own time and paid for out of their own pockets. 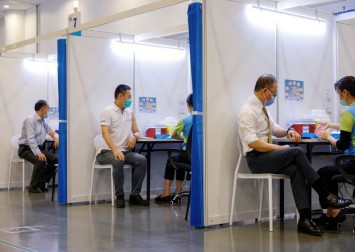 Cheung Wai Kuen, chairman of the Hong Kong Postal Workers Union, told a Monday radio programme he could already foresee difficulties with that timeline - even just for employees at the city's main post office.

Cheung said he and his colleagues had been working diligently to help the government roll out anti-pandemic initiatives, including distributing masks and signing other residents up for jabs. That busy schedule, he said, made it hard to take time off from work to get vaccinated themselves.

"We have no problem, and our colleagues would love to get vaccinated … But it would be difficult for us to co-operate when you have such a concrete deadline," said Cheung, adding the government's plan would be complicated by the need to compete with other civil servants for limited time slots.

"I am sure other departments may be experiencing the same thing, too," he said.

Helen Chan Heung Lai, assistant postmaster general, noted that the post office had moved employees from the back office to the front line to help and brought in dozens of retired postmen on a temporary basis to help ease the workload.