China Southern Airlines has asked passengers not to be superstitious following the latest incident of a passenger throwing coins for good luck.

A woman in southern China has been detained for flipping six coins at a plane to pray for a safe trip, in the fifth such incident this year.

The airline said on its Weibo microblog account that the woman, a first-time flier, threw the coins to pray for blessings. The coins were all found and the flight took off after a delay of 78 minutes. 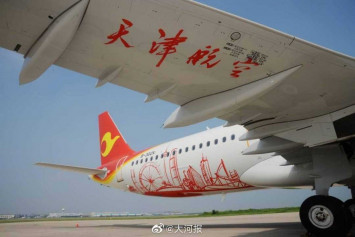 China has seen numerous such incidents since the first reported case in 2017, when an elderly woman threw a handful of coins at a China Southern Airlines plane. She was released without punishment after a stern lecture from police.

Some of those involved in such incidents this year have not been let off so lightly. In February a man was detained for seven days for throwing coins at a plane's engine in the airport in Anqing, Anhui province, southeast China. Earlier this month, a woman who followed his mother-in-law's advice to throw coins at a plane at Tianhe Airport in Wuhan, in the northern province of Hubei, was detained for 10 days.

Weibo users have urged airlines to be creative in deterring such frequent bad behaviour.

"Why not post a QR code in boarding areas for passengers to scan and pay for the blessing? They have idle money anyway," said one user.

"It's very easy to solve this: severe punishment with media reports," said another Weibo user. "The economic losses of such an incident will all be shouldered by the passenger with court enforcement, followed by criminal detention on charges of damaging civil aircraft. Who'd dare to toss coins after several such examples?"

A man who threw two coins at the engine of a Shenzhen Airlines plane when boarding a flight from Nanning to Shenyang in July 2017 was sued for more than 70,000 yuan (S$14,183) by the airline. The two parties settled in March, with the man paying 50,000 yuan.