'Urgent and grim': Beijing on Covid-19 alert after sudden rash of cases

More than a dozen new Covid-19 cases were detected in Beijing on Saturday.

The capital of China is on high Covid-19 alert and plans to test some sections of the community after the city recorded 15 new community cases on Saturday (April 23).

Pang Xinghuo, deputy director of the Beijing Centre for Disease Prevention and Control, said undetected local transmissions started in the city about a week ago, and involved schools, tour groups and families.

“There were hidden transmissions for a week and the infected people came from different backgrounds and a wide range of activities,” Pang said.

She said six cases were reported on Friday and more cases were expected to be detected through mass screening.

Of the 15 symptomatic cases reported on Saturday, 12 were in Chaoyang district in the city’s east, two were in Fangshan in the southwest and one was in Shunyi in the northeast.

Nine are students from a school and one is a courier worker, according to the municipal government.

Mass testing will be conducted of senior citizens who had been on tour groups, construction workers and the school where the cluster was identified.

The authorities did not report on asymptomatic cases, which are thought to be far more numerous.

China has been battling surges in various big cities in the past few months, particularly in Shanghai, where residents have been in lockdown for four weeks in a bid to contain the country’s worst outbreak.

Shanghai was initially reluctant to impose a citywide lockdown but took the drastic measure as cases continued to climb and the central government sent in inspectors. 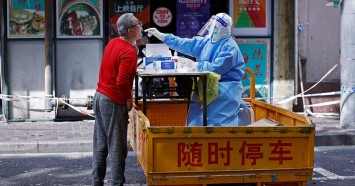 The lockdown has taken a huge emotional and economic toll – and still not brought numbers down. On Saturday, Shanghai reported 23,370 new cases, taking the city’s total to about 466,000 since March 1.

On Friday, Beijing Communist Party boss Cai Qi, mayor Chen Jining and other city leaders met in the morning and again that evening to organise control efforts, according to the official Beijing Daily.

“The meeting pointed out that our city [Beijing] had suddenly recorded some cases and many transmission chains were involved. The risk of further hidden transmission is high. The situation is urgent and grim,” Beijing Daily reported.

The city had to act quickly and handle cases the day they were discovered to stop the transmission in the shortest time possible, the report said.

The southern tech hub of Shenzhen imposed a week-long lockdown in mid-March after reporting about 60 cases.