As China and the United States continue to wrestle over trade disputes and geopolitics, Vietnam is performing a balancing act in the stormy South China Sea as it seeks to maintain its strong ties with Washington while not upsetting Beijing, experts said.

Earlier this week, Hanoi used the latest row over a US freedom of navigation operation in the disputed waterway to not only show its support for its Western ally but also reaffirm its territorial claims there.

Earlier this week, Hanoi used the latest row over a US freedom of navigation operation in the disputed waterway to not only show its support for its Western ally but also reaffirm its territorial claims there. 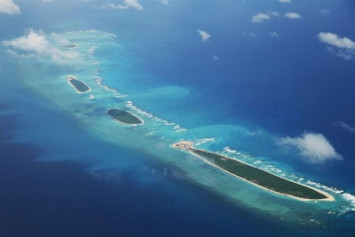 Derek Grossman, a senior defence analyst at Rand Corporation, said that while the statement was fairly typical of the way Vietnam tended to align itself with Washington on issues like freedom of navigation, its timing was surprising given the current high levels of tension between the US and China.

"The growing closeness of US-Vietnam defence ties is remarkable as Hanoi typically likes to remain below the radar to avoid unnecessarily antagonising Beijing," he said.

On Monday, Beijing slammed Washington after the USS McCampbell, a guided missile destroyer, sailed near the disputed Paracel Islands, which are claimed not only by Vietnam, but also mainland China and Taiwan.

Foreign ministry spokesman Lu Kang told a regular briefing that Beijing had issued "stern representations" to Washington as a result of the US operation which, he said, violated China's law.

US Pacific Fleet spokeswoman Rachel McMarr said in a statement that the freedom of navigation operation, which saw the McCampbell sail within 12 nautical miles of the Paracel chain, was intended to "challenge excessive maritime claims".

Collin Koh, a maritime security specialist at Nanyang Technological University in Singapore, said that while Hanoi's support for the US freedom of navigation exercise came as no surprise, it was influenced by the fact that it took place close to islands it claims.

"Vietnam's response to exercises in the Spratlys, for example, tend to be more muted, in part because the disputes [over them] are multilateral and Hanoi doesn't want to get involved in a complicated situation."

The Spratly Islands are claimed by Vietnam, China, the Philippines and Malaysia.

While Hanoi had used the McCampbell incident to restate its claims in the South China Sea, it did not want to antagonise or upset China, its largest trading partner, said Carl Thayer, emeritus professor at the University of New South Wales and an expert on the Vietnam.

Hanoi wanted to remain "equidistant in its relations with the major powers", he said

A recent study by the ISEAS-Yusof Ishak Institute in Singapore found that among Southeast Asian nations, Vietnam was the biggest supporter of US power in the region.

Of the 1,000 academics, analysts and other experts polled, more than half of the respondents from Vietnam expressed either "strong" or "some" confidence in the US as a strategic partner and provider of regional security.

He said the US hoped to strengthen collaboration on freedom of navigation in the South China Sea.