In response to a viral video exposing shoddy cleaning practices at 14 luxury hotels, health departments in Shanghai and Beijing, where most of the disgraced hotels were located, dispatched inspection teams on Thursday to take a closer look.

Health officials in Beijing's Dongcheng, Haidian and Chaoyang districts collected samples from four of the hotels shown in the video. Test results will be made public, they said.

The Beijing Municipal Commission of Tourism Development summoned managers of the four hotels for an inquiry on Thursday. If the claims are true, the hotels will be ordered to rectify their hygiene procedures.

The 11-minute video titled The Secrets of Cups, was produced and uploaded to Sina Weibo on Wednesday night by a well-known Chinese blogger who goes by the username Hua Zong Diu Le Jin Gu Bang. Within 24 hours of its release, the video was viewed more than 14 million times, sparking heated discussions in print and online media.

Some of the hotels mentioned in the video were the Waldorf Astoria Shanghai, the recently opened Bulgari Hotel Shanghai, the Park Hyatt Beijing and the Aman Summer Palace Luxury Resort in Beijing. A one-night stay at any of these hotels costs at least 1,000 yuan ($144).

The video showed housekeepers cleaning drinking mugs with soiled towels or the same cloth that was used to wipe toilet seats. 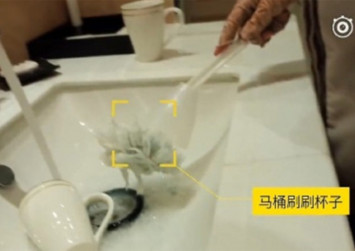 Wu Dong, the blogger who made and shared the video, identified himself in an introduction as a person who may have stayed at the most hotels in China. A self-employed investor, he claimed to have spent 2,000 nights at 147 luxury or boutique hotels in the country over the past six years.

Wu said all the footage was recorded this year. He was inspired to create it after walking in on a housekeeper who was using a bath towel to clean cups.

"It's a problem prevalent in the entire industry. The reason I exposed the 14 hotels, in particular, is that they are the most expensive, the most popular or are generally considered benchmarks of the industry," he said in a Beijing News video on Thursday.

Better known by his pseudonym, Hua Zong Diu Le Jin Gu Bang-which means "Monkey King has lost his magic cudgel"-Wu rose to fame in 2012 for using news photos to identify and list the 11 luxury wristwatches worn by a government official in Shaanxi province. The revelation led to an investigation and the official was later sentenced to 14 years in prison for corruption.

The Park Hyatt Beijing and the Shangri-la Hotel Fuzhou, which were among the 14 hotels featured in the video, issued apology letters on Thursday, saying that they would conduct additional training and self-checks.

This is not the first time that some of China's most expensive and sought-after hotels have been caught in shoddy cleaning practices. Last year, five luxury hotels in Beijing failed to change bedsheets as required after guests checked out.

Lanmei Test, an organisation that claims to be independent, released a video on WeChat of an undercover inspection in which its employees left marks on sheets, toilets and cups at several five-star hotels.

The marks-visible only under ultraviolet light-were still there when Lanmei employees checked into the same rooms the next day.

ALSO READ: People have been boiling their underwear in hotel kettles and it's super gross