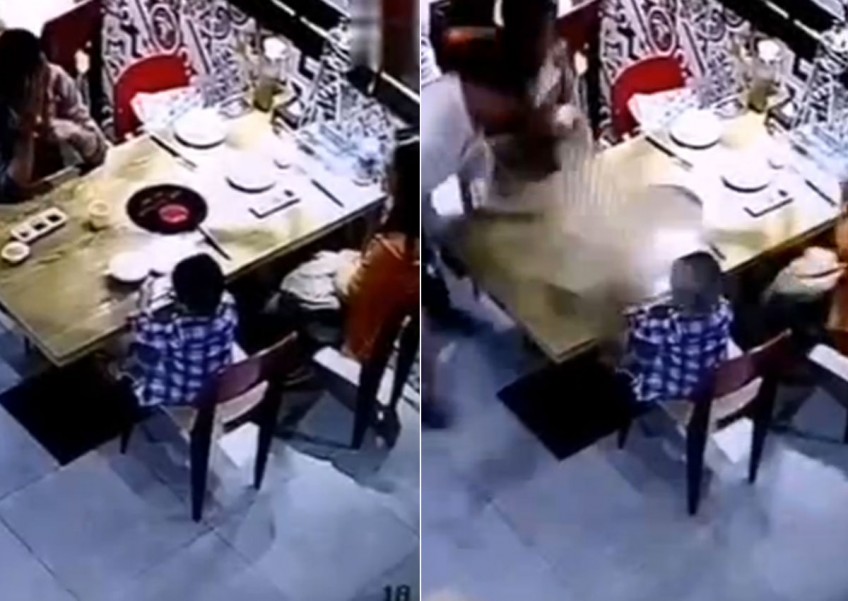 A trip to a hotpot restaurant took a dramatic turn when one young boy's parents witnessed him getting scalded right before their eyes.

Video footage of the incident which supposedly happened in China has since gone viral on Chinese social media sites.

The little boy could be seen using a mobile phone at the table as a waiter holding a huge pot of broth approached the family of three.

Unfortunately, the waiter slipped and dropped the entire pot of steaming hot broth on the table.

This caused a huge amount of soup to spill out straight onto the child's face and body.

Although everything happened within a matter of seconds, the boy's parents were quick to act and his mother immediately grabbed the boy out of his seat.

The boy's father, who was sitting directly opposite him, also moved swiftly and rushed over to check on him.

It is not clear what happened to the boy and where exactly the accident took place.

Chinese netizens took to Weibo to speak up for the waiter as they believed he was not at fault and that it was purely an accident.

Instead, they blamed the restaurant for not ensuring that the floor was clean enough and free from oil.

Situations such as this could have well been avoided if restaurants implemented measures that would prevent terrifying mishaps, said some netizens.

Here's hoping the boy is fine and has a speedy recovery.