What is shachuhaku? Hongkongers take to camping in cars at scenic spots as Covid-19 pandemic cripples air travel

Jacky Cheung enjoying another night of shachukahu on Lantau Island.

It was a cold and windy evening, but cleaning company operator Jacky Cheung Siu Fung still decided to drive to a little-known waterfront on Lantau Island, and spend the night inside his vehicle.

The 44-year-old man was not alone. He reached the scenic spot and parked his Toyota Town Ace next to the vehicle of friend Bobo Chan, a freelance graphic designer who was at the site with her two-year-old daughter Shelbie.

Cheung and Chan raised a shelter between their cars, setting up lamps and a makeshift kitchen complete with a mini-dining table and steaming hotpot.

"We're not doing car camping, as some may call this. This is shachuhaku," Chan explained, referring to a leisure activity or even a lifestyle in Japan, where car owners live out of their vehicles, turning them into well-equipped mobile homes.

Shachuhaku, a Japanese term mostly used for the practice of staying overnight in a car - usually for fun or convenience, but also due to financial or personal issues - has now become the activity of choice for Hongkongers with wanderlust but nowhere to go given travel restrictions amid the raging Covid-19 pandemic.

The difference between it and car camping is that shachuhaku practitioners do not sleep in tents. While they may cook and dine in the open area next to their vehicles, they aim to do everything in cars, including answering the call of nature with portable toilets.

Shachuhaku participants are not fans of much bigger recreational vehicles such as caravans, as they take pride in their tiny car cabins which they have furnished into a liveable space, all while adhering to strict rules of vehicle modifications.

"The pandemic stopped us from travelling abroad, so we can either find another way out, or keep complaining at home," Chan, who is in her 30s said. 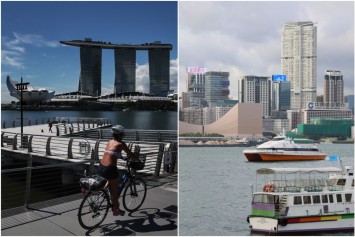 Letting her daughter experience fun while being educated by the great outdoors was the strongest motivation behind her new hobby. "I really don't want her to be stuck at home watching TV, so I keep searching for new shachuhaku sites that suit her."

Chan used to be an active traditional camper, but the closures of designated campsites under the Covid-19 social-distancing measures had caused her to switch to shachuhaku.

Over the past year, she has stayed out in her car at least one night and half a day each week. Seaside spots on Lantau Island are her favourite haunts.

Cheung was also glad to find a way to beat the blues of staying home. He has practised shachuhaku for two years and became more addicted to it during the pandemic.

"The pandemic allows me to have more time for shachuhaku," he said, referring to his shrinking school-cleaning business. "All activities are banned in a pandemic, so now you can do this to relax yourself."

Cheung has been sleeping out four or five nights a week, while maintaining his social life by meeting other practitioners. His favourite locations include Tung Chung and Tai Mo Shan.

Chan and Cheung, recognised by their peers as pioneers in the local circle of shachuhaku, have been sharing their experiences online.

Both noted the Hong Kong shachuhaku community had grown in size. Over the year, they have received a surge in inquiries from interested parties on social media, with Chan getting as many as 500 messages in a month.

"Someone asked me, apart from my car model, what other makes are good for shachuhaku. Another person bought a car immediately and asked for my help in fixing it up," Chan said.

Car dealer Paul Leung Pong, who jumped on the shachuhaku bandwagon this year, also said that much to his surprise, his business in new and used car sales had seen a 200 per cent growth during the pandemic, with some buyers looking to explore shachuhaku.

"Three or four people would come and ask about shachuhaku in a month," he said, adding that the Toyota Wish, Honda Stepwagon, Mazda CX5 and CX8 and some Suzuki models were among those popular with budding enthusiasts.

For Cheung, being able to install a small remote-controlled TV driven by the car battery was a big source of satisfaction. "It won't feel like home without a TV and remote control in your hand."

He also threw in a fridge that could run at minus 18 degrees Celsius.

But Hong Kong has strict rules on modifying vehicle compartments.

Lawyer Vitus Leung Wing-hang said adding any extra and fixed installations in a vehicle could break the law, if users were unfamiliar with regulations.

Another lawyer, Barry Chin Chi Yung, pointed out that cooking with or without fire inside vehicles and the use of large portable power stations, or hooking up car batteries to appliances could constitute offences for the dangers they could cause.

He also warned that car owners could be faced with zero compensation after an incident if alterations were made without notifying the insurance firms.

Chan and Cheung admitted they were aware of the potential legal risks of their hobby, including the modifications and parking locations.

Before the pandemic, Chan said Hongkongers would only care about getting out of town for vacations, and never bothered to look closely at where they lived.

"Hong Kong actually has many beautiful places ... not easily located and accessed, though, but they do exist and I've proven it," she said.

When asked if it was better to stay home or in the car, Cheung said: "Definitely my car, which belongs to me.

"I'm a cleaner and I love keeping things clean. Staying inside a clean environment is so enjoyable."

*The people interviewed in this story removed their masks for the accompanying photos and video.