Why do giraffes have long necks? It could have been to fight for mates

Giraffes may have evolved long necks to fight with rival males for mates, according to an analysis of fossils from an early ancestor of the mammal dating back 17 million years.

Just how giraffes evolved their long necks has long puzzled scientists. It is commonly believed that it was driven by competition for food — allowing the tallest land animal to access treetop leaves in the African savannah woodlands well outside the reach of other ruminants.

But fossils from the ancient giraffoid species, found in China, had helmet-like headgear "possibly for use as a weapon in intraspecific male competition", according to an international team led by researchers from the Institute of Vertebrate Palaeontology and Palaeoanthropology at the Chinese Academy of Sciences.

"[The newly discovered giraffoid] had a distinctive disk-like headgear combined with a complex head-neck morphology suggesting that it performed fierce headbutting behaviour," they wrote in an article published in the journal Science last week.

"'Necking' combat was likely the primary driving force for giraffes that have evolved a long neck, and high-level browsing was likely a compatible benefit of this evolution," the team from Austria, China, Germany and the US said.

That combat involved hurling their rock-solid skulls by swinging their necks — two to three metres long — against the weak points of challengers, the researchers said. The longer the neck, the greater the damage to the opponent.

Present-day adult males usually grow to between 4.6 and 5.5 metres, and giraffes have seven neck vertebrae — the same as humans and other mammals.

The researchers called the newly discovered ancient species Discokeryx xiezhi. With a disk-like large ossicone in the middle of its head, it is named after the one-horned xiezhi, a creature from ancient Chinese mythology.

Fossils of the ancient giraffoid — its full skull and four cervical vertebrae — from the early Miocene strata were found on the northern margin of the Junggar Basin in Xinjiang, western China. 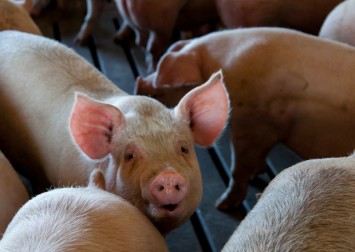 The Earth was warm and densely forested back then but the giraffoids roamed in open grasslands that were drier, and they might have migrated seasonally, according to the researchers. That barren, harsh environment might have caused survival-related stress, leading to violent fighting behaviour.

When the genus Giraffa emerged around seven million years ago, the East African Plateau also changed from a forested environment to open grassland, pushing the direct ancestors of giraffes to adapt.

"It is possible that, among giraffe ancestors during this period, mating males developed a way of attacking their competitors by swinging their necks and heads," the researchers said.

"This extreme struggle, supported by sexual selection, thus led to the rapid elongation of the giraffe's neck over a period of two million years to become the extant genus Giraffa."