Staff of Apple Daily in their Tseung Kwan O office.

The fate of Hong Kong’s Apple Daily is hanging in the balance after Thursday’s (June 17) crackdown by national security police on its top leadership and a further freeze of assets that could send it over the edge financially, analysts have predicted.

With its leadership hobbled by the arrest and its finances under severe strain, analysts said its listed parent company, Next Digital, had to raise enough money to stay afloat in the coming months.

For example, the 1,300 employees on its Hong Kong payroll accounted for the lion’s share of staff costs at HK$920 million as of March last year.

“It is a serious matter if it breaches the national security law ,” Gordon Tsui Luen On, chairman of the Hong Kong Securities Association, said. “The arrests of senior personnel and the freezing of assets will affect operations and management, incurring high risks for the listed company.”

Next Digital suspended its share trading on Thursday before the markets opened. The stock was last traded at 29 HK cents, with the company valued at HK$764.5 million, as of Wednesday.

Tsui urged the company to keep investors informed of the latest situation.

Last month, the Security Bureau froze nearly HK$500 million of jailed Apple Daily founder Jimmy Lai Chee Ying’s assets, including his 71 per cent stake in Next Digital as well as the local bank accounts of three other companies he owns.

After that first asset freeze, Next Digital’s management said the group’s existing working capital would enable it to continue operations for at least 18 months from April 1 this year, even without additional funding from Lai.

It also said then the asset freeze had no impact on the standing shareholder’s loan Lai had provided to the company and its subsidiaries. 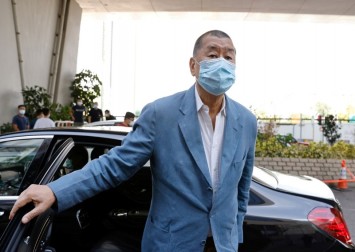 With the second asset freeze on Thursday, that timeline could well be shortened without further cash injections, analysts said.

On top of grappling with its depleting leadership ranks and financial strain, Apple Daily has also had to deal with an increasingly vocal pro-establishment camp lobbying the government to outlaw the publication.

Founded in 1995, Apple Daily was the showpiece publication for Lai, a self-made entrepreneur known for his early success in founding clothing retailer Giordano in the late 1980s before venturing into the media landscape and creating Next Media, now called Next Digital, in 1990.

In the early days after its founding, Apple Daily was known for its unconventional, tabloid-style journalism.

In 1998, the publication found itself embroiled in a backlash after one of its reporters was revealed to have paid HK$5,000 for a man to engage a prostitute days after his wife jumped to her death with their two sons, aged 10 and six.

The paper, which interviewed the man, later apologised over paying for the “exclusive”.

From the start of the second term of Hong Kong’s first chief executive Tung Chee Hwa in 2002, Apple Daily shifted its focus to political reporting. It rapidly expanded readership as a ferocious critic of Beijing and the Hong Kong government.

Since 2003, it also gained notoriety for printing anti-government posters for residents taking part in the annual July 1 march to mark the city’s return to Chinese rule.

An estimated half a million people took to the streets on July 1 that year to oppose a national security bill that the Tung administration was eventually forced to shelve. 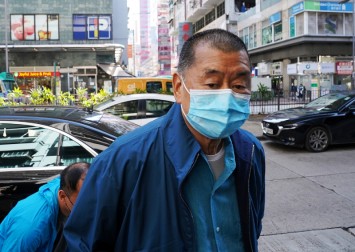 In recent years, former Hong Kong leader Leung Chun Ying has been one of the staunchest critics of Apple Daily .

Last month, the tabloid reported that its publisher and Next Digital CEO Cheung Kim Hung had told colleagues it was “ridiculous for people to spread rumours” about Apple Daily being outlawed.

But writing on Facebook, Leung asked if such a fate awaiting the paper was more ridiculous than what he said was the tabloid’s own deplorable conduct.

“Whenever there were large-scale anti-government activities, placards printed nicely and especially for the march would be enclosed in the Apple Daily issue … Is Apple Daily really a news organisation,” he wrote.

Leung also suggested on Facebook on Thursday that it was legitimate for police to take action against Apple Daily .

“No one is above national security laws. This applies to the press and is part of the definition of press freedom,” he said.

While Leung stopped short of saying whether Apple Daily should be banned, pro-establishment legislator Holden Chow Ho Ding, a lawyer, said the government should consider the option.

“Under the security law, there’s a provision empowering authorities to prohibit the operation of an organisation that endangers national security,” he said.

Chow said he was referring to Article 31 of the law, which states that if a company has committed an offence under the security law, authorities can suspend its operations, or revoke its licence or business permit.

In April, police chief Chris Tang Ping Keung accused Apple Daily – without naming it – of “inciting hatred” and declared that he would back a fresh fake-news law proposed by the city’s leader in February.

Tang’s criticisms came after the tabloid ran a photograph of a ­schoolgirl pointing a toy gun at her ­classmate during the police college’s open day, and juxtaposed it against an image from 2019 showing a controversial police operation at the height of the social unrest. 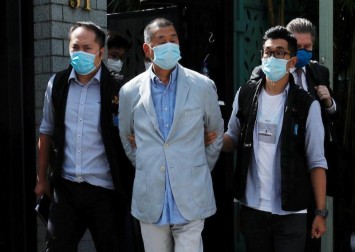 Under the Registration of Local Newspapers Ordinance, Hong Kong’s chief executive has the power to prohibit the publication and distribution of local newspapers.

But Chow said that there was no need to rely on other legislation, if authorities could find sufficient evidence to prove that a news organisation had breached the security law.

Stanley Ng Chau Pei, president of the Beijing-loyalist Federation of Trade Unions, also said he believed that Apple Daily should be banned under the national security law.

“The security law bans any organisation or individual from endangering national security. So it should be outlawed,” he said.

At a press conference on Thursday, Secretary for Security John Lee Ka Chiu was asked if the government would ban Apple Daily by July 1.

Lee only said authorities would take the strictest measures against anyone seeking to endanger national security. 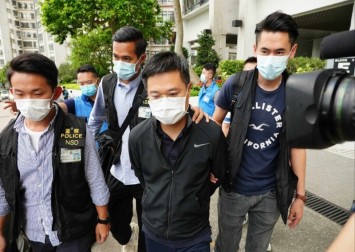 “Endangering national security is an extremely serious crime. We need to curb such acts with the strongest measures, and consider all effective measures that the law allows,” he warned.

However, former Bar Association chairman Ronny Tong Ka Wah, who is also an adviser to the chief executive in her de facto cabinet, the Executive Council, argued there was no basis to outlaw Apple Daily .

“To suspend the operations of a newspaper, you need to prove that the vast majority of its work was non-journalistic and criminal,” he argued.

“It has been on the front lines of press freedom, and dared to report on many sensitive issues ahead of other media outlets,” he said.

“If it were to be banned, other media agencies would lose this protective shield on the front lines, and would be less likely to report on such delicate issues.”