You would think the kung fu frauds who get royally embarrassed by Chinese MMA fighter Xu Xiaodong would learn their lesson.

Alas, one of the wing chun "masters" came back for some more punishment.

Ding Hao was one of Xu's most memorable victims - dropped on his backside multiple times before the referee mercifully stepped in after a few minutes.

He blamed his performance on not being fed enough rice by event organisers before the fight.

The judges also somehow inexplicably scored the fight as a draw last year.

Perhaps that gave Ding some misplaced confidence because he got back in the ring this weekend to fight another Chinese MMA fighter nicknamed "A Hu".

On paper it seemed like an easier fight - whereas "Mad Dog" heavily outweighed Ding, our wing chun master had 12 kilograms (26.5 pounds) on A Hu, and was 5 centimetres taller.

If you think that helped him one bit, guess again.

Ding rushes forward, not guarding himself at all, and tried to engage A Hu with wing chun trapping techniques, but ended up eating a barrage of punches.

A Hu then hits him with a bunch of Muay Thai knees in the clinch, rendering Ding's trapping useless.

Watching on from ringside is Ding's shifu, Yu Changhua, who you may remember getting beaten by a one-armed boxer on the same event that Xu smashed Ding.

Read Also
Xu Xiaodong only beat me because I'm vegetarian, says wing chun 'master' who compares himself to Bruce Lee 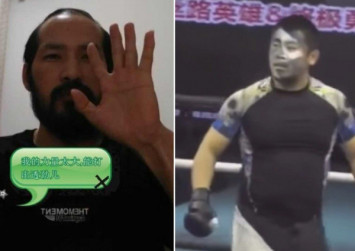 Ding essentially just gives up doing any wing chun at this point and tries to low block A Hu's roundhouse kicks with his arms instead of checking them.

Again, not a very effective defensive technique against a skilled Muay Thai fighter, with Ding leaving his head wide open.

Rather predictably, A Hu lands one flush on the temple and Ding crumples into the ropes and goes face down on the canvas at 1:48 of the first round.

Xu, who has made it his mission to expose "fake kung fu", seemed to take enjoyment from the whole show, posting the video on his own YouTube account.

"Shouldn't have skipped lunch again," wrote one user in the comments on the video, which was also posted by YouTube channel Fight Commentary Breakdowns.

"The wing chun guy has watched Ip Man too many times, thinking he can do movie kung fu in real life," said another.

Unbelievably, Ding's coach said that he wants him to fight again soon.

Maybe give it a rest, guys.