China's US-born figure skater Zhu Yi burst into tears on the ice after stumbling twice during her latest Winter Olympics routine, as online criticism of the 19-year-old intensified.

Zhu was subjected to abuse on Chinese social media platform Weibo after she tumbled and crashed into the wall during Sunday's (Feb 6) women's short programme team event.

She finished last again during Monday's free skate event, with a score of 91.41, and many users on the Twitter-like Weibo chided her for crying, pointing out that all competitors at the Olympics face pressure.

"I was very emotional during the routine and wanted to cry. I couldn't hold it back, and the tears came flowing," Zhu told China News Service, after another disappointing routine.

"All of that is in the past," she added. "I hope I can adjust myself and compete well in my singles event."

Zhu's Olympic campaign will continue on Feb 15, when she competes in the women's single short programme. 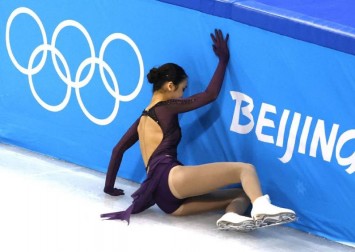 If she ends the day ranked among the top 24 skaters, she will skate again on Feb 17 in the women's free skating event.

Weibo has again removed some of the incendiary posts and comments criticising Zhu, after seemingly censoring the trending hashtag discussing her first performance.

"Zhu Yi can block this entry in Weibo's hot search," one user wrote. "I don't know. I thought figure skating achieved a historic result. If you look closely, it turned out to be a historic shameful thing. It's a pity that it wasn't the same day as the Chinese men's football match. How much less pressure can the men's football have? Hahaha."

Born in Los Angeles, California, the teenager renounced her American citizenship in 2018 to represent China, and changed her name from Beverly Zhu.

But online users have criticised her lack of Chinese-speaking skills, and claimed she only got her place in the Chinese team because of her father Zhu Songchun's connections.

The renowned computer scientist, who specialises in artificial intelligence, returned to China in 2020 from the University of California, Los Angeles, to teach at Tsinghua University and Peking University.

Hu Xijin, the retired former editor-in-chief of state-run media outlet Global Times, also came to Zhu's defence on Monday, saying that cyberbullying should not be tolerated.

"Whenever people have an opinion, they have to hurl their emotions at a young athlete," Hu wrote on Weibo. "When she makes a mistake, social media will openly kick her when she's down or bully her online. That's unacceptable no matter what."

Zhu's teammate Jin Boyang also defended her she left the rink in tears on Sunday.

"Zhu Yi has been very hard-working," he told the Xinhua News Agency. "She faced immense pressure: It was her first time to take part in the Olympics, and it was held in Beijing, at her home country."

Jin, a double-bronze-medallist at the World Figure Skating Championships, competed alongside Zhu in the team event, where China finished fifth.

"I hope she can adjust. We will all console her and hope she can perform her best next time," he said, adding that Zhu had performed well during the Beijing 2022 test competitions.