Shanghai Metro on Wednesday released the initial briefing regarding an incident where a woman was killed in an accident along the city's Metro Line 3 on Tuesday night.

According to the briefing posted on Sina Weibo, the victim was climbing over a platform safety rail at Caoyang Road Station at 6.55pm when the train was about to arrive at the station.

The driver hit the brakes as soon as he spotted the woman. As the train came to a stop, the woman was trapped between the train car and the safety rail.

Metro staff called emergency services at once and removed the rail to release the woman at 6.58pm. Medical staff declared the woman dead at the scene when they arrived at 7.16pm. 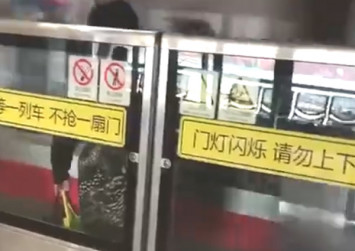 Shanghai Metro said surveillance video confirmed that the woman did try to go across the safety rail, which opens only when it's time to get on and off a metro train.

Local police are still investigating the motive behind her action, which remains unknown.