A woman who took another passenger's seat on a high-speed train and refused to vacate it has been banned from train travel for 180 days, China Railway Guangzhou Group said on Thursday.

A video posted online showed Zhou occupying a window seat train on a train traveling from Yongzhou, Hunan province, to Shenzhen, Guangdong province, on Wednesday, when she was supposed to sit by the aisle.

The window seat passenger later boarded the train and found her seat already taken. She asked Zhou to move but Zhou refused, prompting a complaint to train attendants, a member of the train’s staff said in the video. 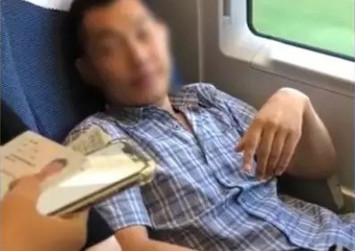 “The ticket says my seat is 10D, but it doesn’t say 10D is not the window seat,” Zhou said in the video when an attendant asked her to move. “Who said I cannot sit here? I bought the ticket.”

Zhou occupied the window seat until she left the train at Guangzhou station. The woman whose seat she took was given another window seat in the neighboring carriage.

China Railway Guangzhou Group released details of Zhou’s punishment on social media on Thursday morning. It said the punishment was based on a guideline for dealing with troublesome passengers that took effect on May 1.

The video has gone viral online, triggering an uproar and condemnation of Zhou's behavior. Many netizens said the punishment was too lenient to deter bad behavior and called on the railway bureau to blacklist Zhou and ban her from taking all kinds of transport.

Zhou was the second person in a month to be punished for such behavior. On Aug 21, a video posted online showed a man named Sun He sitting in the wrong seat on a train from Jinan, Shandong province, to Beijing and refusing to move. When train staff repeatedly asked him to move, he claimed he could not stand and needed a wheelchair.

Outraged netizens across the country accused Sun of faking disability and uncovered Sun's identity and personal information. He apologized on Aug 22. China Railway Jinan Group banned Sun from train travel for an unspecified period and he was also fined 200 yuan.