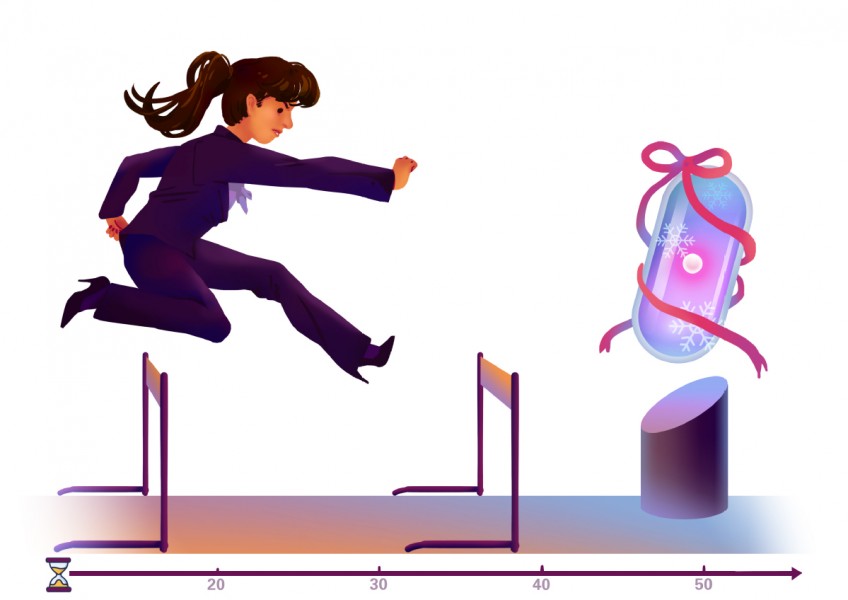 A growing number of younger females in China are pushing to extend their period of fertility.

In February, when Zhan Yingying turned 30, she wrote to the Committee of the Jilin Provincial People's Congress and asked it to guarantee her right to have her eggs frozen so she could be sure of starting a family at a later date.

The psychology graduate contacted the Jilin authorities because in 2002, deputies in the province passed a law granting unmarried women access to assisted reproductive technology, making the northeastern province the only place in China to offer the procedure for single women.

The regulation stated that it is legal for females who are 20, the legal age of marriage in China, but who decide to remain single, to use medical assisted reproductive technology to have a baby.

During the procedure, unfertilized eggs are harvested from the ovaries, then frozen and stored for later use, when they are thawed, fertilized by sperm in a lab and implanted in the uterus via in vitro fertilization techniques.

From a medical perspective, prime fertility occurs between ages 20 and 35. After 35, the quality of the eggs deteriorates, and it also becomes harder to extract them.

However, despite the legality of the process in Jilin, the provincial authorities have been reluctant to allow single women to use the service because the procedure is illegal under national law.

"I felt very excited and thrilled when I learned that single women can extend their period of fertility by using modern technology," Zhan, from Guangzhou, Guangdong province, wrote in her letter. "However, when I learned that unmarried women nationwide are prohibited from using assisted reproduction technology, I felt saddened and depressed."

Few women in China were aware of egg freezing, and had little understanding of the regulations governing the practice until 2015. That was when Xu Jinglei, a well-known actress, used her micro blog to relate her experience of the procedure in the United States two years before, when she was 38.

"It was the only way I could ensure that I would be able to have a baby later in life," she said.

Xu's posts sparked a nationwide debate about access to egg preservation and reproductive rights, and a growing number of women, both married and single, began inquiring about undergoing the procedure in the US and its success rate, along with the cost, which ranges from $8,000 yuan to $15,000 yuan for each session.

The rise in interest comes as more women look to postpone having a family until they have secured their careers, and as the age for marriage rises as Western ideas gain greater sway.

Yu Qi, director of the assisted reproductive center at Peking Union Medical College Hospital in Beijing, said that in the past five years he has seen a growing demand for consultations related to egg extraction, freezing and storage, and every day, at least one woman age 35 or older requests advice about the procedure.

The problem for Zhan is that egg freezing is classified as a supplementary IVF measure in China, and is only available to married women who have had treatment for infertility or those undergoing chemotherapy for cancer and who are unlikely to conceive naturally.

Freezing eggs solely for the purpose of preserving or extending a single woman's period of fertility is illegal, according to the 2001 Assisted Reproductive Technology Regulation.

Essentially, fertility rights are protected based on marital status under Chinese law, and even though the regulation passed in Jilin allows single women access to treatment, it is never enacted because it conflicts with age-old beliefs and values under which children are expected to be raised in a "traditional" family setting with both a father and mother.

Lu Jiehua, professor of sociology at Peking University, said the Jilin regulation was passed as a symbol of social transformation and progress.

"Having children is a function of the family, but as society develops, family functions gradually weaken," he said. "Allowing single women the right to choose when they will be fertile is a personal issue, which will require legal changes as society becomes more tolerant."

Zhan said the regulation has given her hope that the law can be amended in favor of single women, and has emphasized the conflict between laws passed by central government and provincial bodies.

"I think the essence of the national law is to preserve the traditional family unit of 'one husband, one wife'. The problem is one of a lack of trust－single women are not trusted with the responsibility of raising children on their own. Of course, marriage is one way of having a family, but it doesn't always have to be that way."

In response to the impasse in China, a growing number of women are heading overseas to have their eggs frozen.

Data from the Society for Assisted Reproductive Technology shows that the number who have the procedure overseas rose from 475 to 8,000 between 2009 and 2015.

Agencies that introduce single women and couples to fertility centers in the US have reported a growing interest in the procedure.

"Demand for egg freezing has risen substantially in recent years," said Gu Siliang, co-founder of Joybaby, an agency in Shanghai, which fielded 1,000 inquiries last year, and arranged for 500 women to undergo the procedure.

Gu said most of her customers work in the financial and investment sectors, so they can easily afford the cost.

Lin Haifan, a stem cell expert and professor of Obstetrics, Gynecology and Reproductive Sciences at Yale University, said, "The attitude of women in the US towards egg freezing is very similar.

"They want to strike a balance between their family life and their careers, so if a conflict arises, they postpone their plans to have a baby. Meanwhile they are concerned that if they wait too long they won't be able to have a baby, so they choose to freeze their eggs while they are still relatively young."

US clinics are gearing up for the rise in demand, with 33 of the 51 assisted reproductive clinics in California providing customized services for Chinese patients, including Chinese-speaking staff members along with documents and websites in Mandarin.

In addition to the legal dilemma in China, some experts have warned about potential health risks related to egg extraction, freezing and storage, and potentially harmful side effects.

Yu Qi, who has worked in the field for 30 years, said he will only perform the procedure if it is medically necessary, because the limited number of eggs produced during each ovulation cycle can potentially be harmful.

"We retrieve the eggs when the patients' estrogen levels are quite high, usually the day before peak ovulation. However, those high estrogen levels may raise the permeability of blood vessels, which could cause the blood to coagulate, and, in the worst-case scenario, produce dangerous blood clots," he said.

Moreover, usually only 50 percent of the eggs that are extracted and frozen can be used after thawing, and they are difficult to fertilize, he added.

Yu stressed that the eggs have a limited active period, and strongly advised women 35 and older not to undergo the procedure. "The quality of the eggs obtained from women older than 40 is pretty bad, and there is a high probability of birth defects if the eggs are harvested from women ages 36 and older."

On December 27, in response to calls from Dai Hairong, a deputy with the National People's Congress, to lift the restrictions on access to reproductive technology, the National Health and Family Planning Commission said the reproductive rights of single women did not accord with traditional rights and morals.

However, the commission, which was disbanded in March, pledged that its successor, the National Health Commission, would maintain research into technology related to egg freezing and would conduct feasibility studies into its clinical use.

Lu, the Peking University professor, argued that traditional Chinese culture does not accept single mothers or babies born outside of marriage.

"Supervision could be difficult when related to ethical issues," he said. "Unregulated freezing might lead to egg trading and surrogacy."

Zhai Xiaomei, a professor of life ethics at Peking Union Medical College, focused on the child's birth and development. She said the use of assisted reproductive technology will result in parents being able to choose when their children are born, thus overturning traditional ideas of natural childbirth.

"Women can choose to have their eggs frozen, but is that in the child's best interests, and is it fair to allow children to grow up in one-parent families, when that sort of background is not normal in China?" she said.

She was also concerned about the growth of social inequality if the use of the technology became commonplace and only wealthy people could afford the procedure.

"After all, it is different from the process of natural fertility," she said.

Zhan said she fully understands the potential risks that egg-freezing technology may bring, but is determined to continue her fight to guarantee access to the procedure.

"I have five years to promote and protect the legalization of the rights of single women to have their eggs frozen for later use. Even though I can't guarantee success within that time scale, I remain hopeful and will continue to strive for the rights laid down by the law in Jilin," she said.