Chinese scientists have found traces of the new coronavirus in the faeces of some infected patients, possibly indicating an additional mode of transmitting the deadly disease.

Health authorities had previously thought the main ways the disease was spread was through respiratory droplet transmission and contact, including touching the face after exposure to a surface containing the virus.

The presence of the 2019 coronavirus RNA, or ribonucleic acid - a molecule that carries genetic codes in some viruses - indicates the disease may live in faeces, the Shenzhen Health Commission said in a statement on Saturday.

The results have echoed similar findings elsewhere, including in Wuhan, the epicentre of the virus outbreak, and the United States, with some scientists saying the research shows it was possible the virus was transmitted via human excrement.

The scientists concluded that the virus could be transmitted "to a certain degree" via facecal-oral transmission.

"Clinicians, especially gastroenterologists, should pay close attention to the atypical symptoms of pneumonia caused by new coronavirus infection, and take personal protection against vomitus and faeces," they said.

Zhang Qiwei, a professor at the School of Public Health of the Southern Medical University, said it was highly likely that the patients' faeces contained the live virus, even though it was RNA that was found. 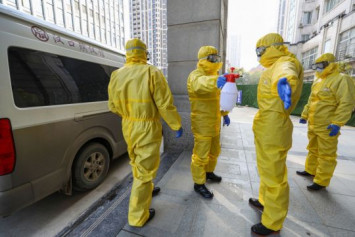 The professor said it was possible the coronavirus might be transmitted via faeces. After entering the intestine and multiplying, it may then be excreted and come into contact with a person's hands, he said.

He also warned that the virus could be turned to vapour by the force of a toilet flushing, endangering people in the same room.

"Now disinfection of toilets may be on the agenda," Zhang told the Beijing News. "Toilets used by patients with new coronary pneumonia or suspected patients need to be thoroughly disinfected and the restroom must be ventilated."

However, Feng Luzhao, a researcher with Chinse Centre for Disease Control and Prevention, said further investigation was needed to prove transmission through this method. He said the recent findings only indicated the virus could replicate and exist in the digestive tract.

"Whether it is transmitted through the faeces or re-transmitted via the formation of aerosols by virus-containing droplets, we need epidemiological investigation and research to further confirm," Feng said at a daily press conference held by the National Health Commission on Sunday.

The phenomena still served as a reminder of the importance of washing your hands frequently, Feng said.

Genetic traces of the new coronavirus have also been found in the stool of a 35-year-old man from the US who had recently travelled to Wuhan.

Doctors treating the man, the first confirmed case in the country, published details of their findings in the New England Journal of Medicine on Friday, though cautioned extrapulmonary detection of viral RNA does not necessarily mean the virus was present.

The clinical significance of coronavirus RNA outside the respiratory tract was unknown at this time, the doctors said.

Confirmed cases of coronavirus have now hit record daily highs, health officials in China say, and the virus has killed at least 305 people and infected more than 14,300 in the mainland.

In 2003, more than 320 residents in the Amoy Gardens housing estate in Hong Kong became infected with Severe acute respiratory syndrome (Sars), a type of coronavirus.

The World Health Organisation found the virus remained stable for up to four days in the faeces of infected people with diarrhoea. This contributed to a significant viral load being discharged into a broken sewage system that helped spread the disease.