A medical worker removes her protective suit after her shift at a hospital in Caidian district following an outbreak of the novel coronavirus in Wuhan, Hubei province, China, on February 6, 2020.

As the coronavirus pandemic reached its peak in China, one in 10 medical workers considered quitting the profession, while one in five said their friends and family avoided them out of fear they would get infected, according to a new report.

The study was conducted by researchers at Tongji Hospital in Wuhan, one of the first in China to feel the full impact of the Covid-19 epidemic, and its subjects were all health workers at the same facility.

Of the more than 5,000 people surveyed on February 8-10, 85 per cent were women, with women accounting for 81 per cent of medical staff at the hospital.

The results were published on Tuesday in the peer-reviewed journal The Lancet.

“Women and those who have more than 10 years of working, chronic diseases, a history of mental disorders, and family members or relatives confirmed or suspected [of being infected] are susceptible to stress, depression and anxiety,” it said.

At the time of the research, the coronavirus outbreak was at its height in China but had yet to spread far beyond its borders.

It has since gone on to wreak havoc around the world, infecting more than 9.3 million people and claiming almost 480,000 lives.

The researchers said that as workers dealt with the pressures of Covid-19, 57 per cent feared becoming infected, 20 per cent felt their families and friends avoided them, and 10 per cent thought about resigning.

Feelings of anxiety and depression were linked to factors such as shift arrangements, the standard of logistical support and accommodation provided by the hospital, exercise habits and respondents’ drinking history, it said.

One of the biggest problems for many of the women was trying to achieve a good work-life balance, the researchers said. 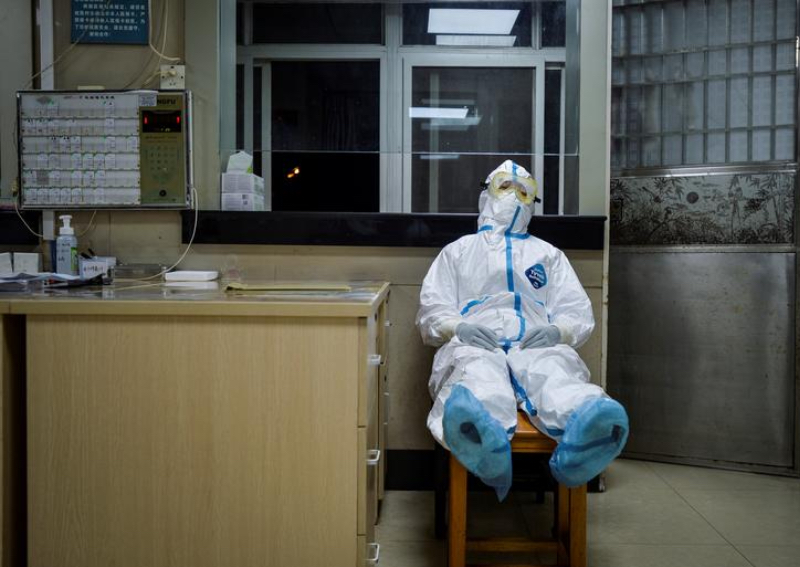 A medical worker in a protective suit takes a break during her night shift at a community health service centre in Qingshan district of Wuhan, Hubei province, China, on February 9, 2020. PHOTO: Reuters

“Owing to entrenched traditional social roles in China, they faced a considerable dilemma, which existed between working and caring for their families, and between family care and avoiding contact with family members.”

Seeking to explain why the psychological impact was stronger on long-serving employees, the study said it was due to “occupational exhaustion and family responsibilities, as most health workers with more than 10 working years are married and have children”.

“It is worth addressing the needs of health workers during this pandemic and provide appropriate psychological support for those at high risk of mental problems,” it said.