Xi Jinping rebukes nations who 'arrogantly instruct others and interfere'

Chinese President Xi Jinping speaks during a joint press briefing with French President Emmanuel Macron, not shown, at the Great Hall of the People in Beijing, China, Jan 9, 2018

Chinese President Xi Jinping said no nation should dictate global rules or interfere in other countries, as Beijing continued to signal its unhappiness over what it sees as growing international meddling in its affairs.

Without naming any country, Xi made his remarks by video link to more than 2,000 officials and business executives attending the annual Boao Forum for Asia in the southern Chinese island province of Hainan.

“Equality, mutual respect and trust should be at the forefront when countries are dealing with each other. It is unpopular to arrogantly instruct others and interfere in internal affairs.”

China has announced record growth of 18.3 per cent for the first quarter as its economy recovers from the damage caused by the coronavirus, but its relationship with the United States has yet to show a similar rebound.

Last Friday (April 16), US President Joe Biden issued a joint statement with Japanese Prime Minister Yoshihide Suga that indicated China was a geopolitical adversary – which Beijing described as a move to “sow division”.

Washington has also begun to consolidate its alliances in Europe and Asia, with US Secretary of State Antony Blinken stressing “the need to engage China from a position of strength”. The US, the European Union, Britain and Canada have imposed coordinated sanctions on China over alleged human rights violations in Xinjiang , which Beijing denies.

“As we are going through the Covid-19 pandemic, people of all countries have more clearly realised that it is necessary to abandon the cold war mentality and zero-sum game, and oppose any form of new cold war and ideological confrontation,” Xi said. 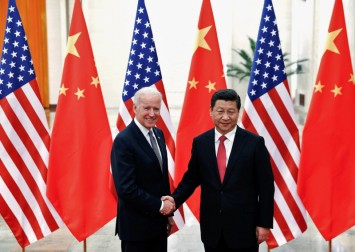 The annual Boao conference is China’s top government-sponsored business forum, sometimes dubbed the Chinese version of the World Economic Forum in Davos. It was cancelled last year because of the coronavirus outbreak .

In an apparent indication of decoupling between the US and China, Biden said on Friday the United States and Japan would jointly invest in areas such as 5G technology, artificial intelligence, quantum computing, genomics and semiconductor supply chains.

Washington’s planned investment in domestic chip production , meanwhile, is widely seen as an attempt to attract South Korean and Taiwanese chip makers to the US. China has also been calling for South Korean companies to expand cooperation in technology including semiconductors, in which there is a global shortage.

Xi told the forum that China would keep opening up its economy to world business and that there should be integration of supply chains, the digital economy and artificial intelligence.

“Any attempts to build walls and decouple are violating economic laws and market rules, which is harming others and detrimental to oneself,” he said.

Xi promised China would work with other nations to deal with climate change, but did not say whether he would attend a Biden-hosted climate summit on Thursday.

The president also defended the Belt and Road Initiative, which has come under scrutiny as it extends Beijing’s geopolitical influence. Xi said the infrastructure investment strategy was open to all nations and was not a “private road for a particular single nation”.