"When snow falls and the white winds blow, the lone wolf dies but the pack survives."

That might not have been exactly what Chinese President Xi Jinping told a group of foreign visitors at a meeting in Beijing but it turns out the powerful ruler of the Middle Kingdom is a fan of the hit HBO television series Game of Thrones .

Xi surprised both his aides and his guests when he brought up the topic, saying "we must all make sure the world we live in does not descend into the chaotic warring seven kingdoms of Westeros", as depicted by George R.R. Martin in his epic fantasy, according to a person who was at the meeting.

It is not clear how much time Xi manages to squeeze out of his busy schedule to watch dragons, knights and sword fights at the heavily guarded Zhongnanhai compound, but he is not the only Chinese leader who likes the series, the final season of which began on April 15. 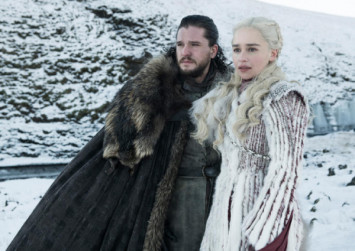 Premier Li Keqiang - the second-highest ranking official in China - also cited Game of Thrones when speaking about China's relations with Central and Eastern Europe at a forum last month in Dubrovnik, the medieval Croatian city that doubles as King's Landing, the capital of the Seven Kingdoms, in the show.

Set in the imagined world of Westeros, Game of Thrones is known for its dramatic twists, political intrigue and strong characters. Its popularity has swept across the world and in China - whose Mandarin name translates as "Middle Kingdom" - the fan base runs into the tens of millions.

Despite Xi and Li's apparent love of the show, the version shown in China through Tencent is not as seen elsewhere in the world, as much of the violence and sex scenes have been edited out.

A Chinese official in Beijing laughed when asked whether Xi and other leaders got to see the edited or unexpurgated version. He said the version they watched was even more condensed as their schedules were so tight they did not have time to enjoy the show in its entirety.

"We call it the diamond version," said the person, who declined to give his name.

It is rare for Chinese leaders to speak openly about their hobbies, but it is widely known that Xi is interested in movies and literature. In a letter he wrote recently to a group of American high school students studying Chinese, he said he liked "philosophy, history, literature, culture, music and sports", Xinhua reported.

He is said to be a fan of Hollywood movies, with The Godfather and Saving Private Ryan apparently among his favourites.

Another source said that during Xi's trip to the United States in 2012, when he was still vice-president, he was asked by a child about his hobbies, to which he replied that he liked watching films.

And when a second youngster asked him how he managed to achieve a good work-life balance, the leader answered in English: "Mission: Impossible."