A woman rides a bicycle during the Xuzhou International Marathon; a woman argues with volunteers while a looter walks away with a box of goodies.

Organisers of the Xuzhou International Marathon have promised to step up security amid bizarre scenes netizens have slammed as "shameful and embarrassing".

Last weekend's marathon staged in China's Jiangsu province attracted scorn both on and off the track with a woman runner brazenly using a bicycle during the marathon, while there were cases of looting from bystanders after boxes of bananas and water bottles placed along the race route were taken away for personal consumption.

In what is becoming an increasing worrisome trend of cheating and scandalous behaviour at marathons on the mainland, the third running of the Xuzhou showpiece - which saw three races being run, namely the marathon, half marathon and 7-km "fun run" - was marred by theft with race volunteers saying some members of the public took away boxes of refreshments meant for the athletes.

There were also reports that desks and chairs set up along the route were also swiped and several volunteers reportedly had rocks thrown at them when things got out of hand.

Volunteers took to social media to voice their grievances, saying some people could not understand why they were not allowed to take the boxes home.

"Once the race was finished [on Sunday] they started to take everything. I could not believe what was happening," wrote a volunteer on Weibo. "Even during volunteer training last Friday, people were taking things away. They were hard to stop," wrote another volunteer on Chinese social media.

Netizens were quick to condemn the "uncivilised" behaviour, calling one woman who tried to take away boxes of refreshments and was filmed arguing with volunteers a "laughing stock for all to see".

Read Also
'Pig' British tourists to be deported from New Zealand after theft, littering, not paying for food 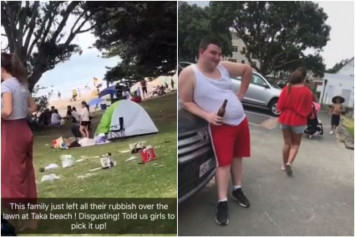 "She had no shame and she lost face. She's uncivilised," wrote the netizen. Organisers were aware of the problems and have vowed to make sure that entrants are genuine runners in a bid to stamp out cheating. Organisers said they might impose a qualifying standard for runners in future. More than 22,000 runners took part in the day's event with 25-year-old Xuo Bujie winning in 2:10.09. About 7,000 took part in the marathon.

Organisers, meanwhile, banned the bike-riding female runner for life after she was seen several times riding a rented green-coloured bike along the route on her way to finishing the marathon in five hours, 38 minutes and 36 seconds. The "runner" who was surnamed Meng could face further punishment from China's athletics association (CAA) after "violating the rules".

At last November's half-marathon in Shenzhen, 258 runners were caught cheating by taking short-cuts and wearing fake bibs. A video of the scandal went viral. Meanwhile, marathon runner He Yinli was hindered by an over enthusiastic volunteer who shoved a national flag at her while she was going for victory, sparking a national debate about patriotism.