A leading Chinese information technology company is under investigation for pressuring its staff to work overtime by hanging banners berating people for not staying back past their finishing times.

The Chutian Metropolis News reported that Inspur, a Shandong-based IT giant in eastern China, was exposed harassing staff to work extra hours for free after management hung banners promoting the practice in its head office in Jinan last month.

The Jinan labour rights supervision authority said earlier this week that it would begin an investigation after the banners were leaked online; triggering a public backlash, the report said.

State broadcaster CCTV weighed in with an editorial on Wednesday saying advocating hard work was not the same as asking people to work for free.

“Inspur Group is showing off these overtime slogans, perhaps thinking they are creative,” CCTV commented. “This behaviour reflects a deformed overtime culture and shows the company’s ignorance of the law and regulations.”

“We admire hard work, but we can’t instil in employees a belief that they must work unpaid overtime,” added CCTV.

Chinese internet users have flooded social media to express outrage over the revelation. 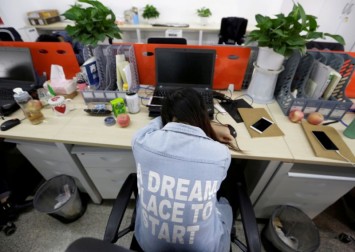 “You ask a worker of this company: does he dare to go off work at a normal hour without those banners being hung up?” wrote one person on Weibo.

The incident happened three months after the Supreme People’s Court and the Ministry of Human Resources and Social Security released a joint warning against China’s excessive overwork culture known as 996 , meaning an employee has to work from 9am to 9pm, six days per week.

The 996 culture, described as “severely violating the law” by the authorities, has been common in China’s technology sector for years, leading to some extreme cases where employees died after working excessively long hours.