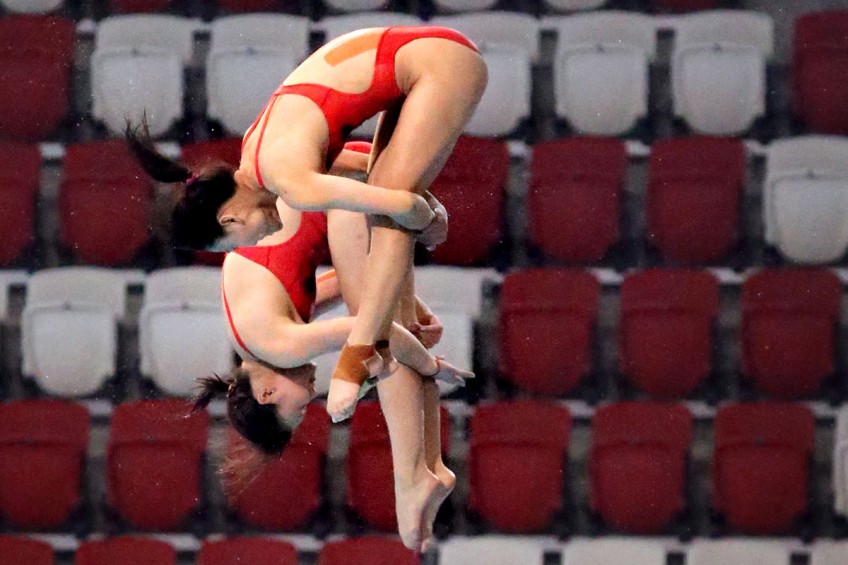 They might have sent their development divers to Singapore, but the Chinese team were still too strong for all comers at the Fina Diving Grand Prix Singapore at the OCBC Aquatic Centre yesterday.

The sport's giants grabbed all three gold medals on the opening day of the three-day meet - winning the men's and women's synchronised 10m platform events, and the mixed synchronised 3m event.

Chinese divers Wang Ying and Wang Han (left, with 288 pts) tasted success in the women's synchronised 10m event on their debut in the nine-stop Grand Prix this year, in only their second competition as partners.

Wang Han, 20, said: "We have been diving together for 10 years already, but Singapore is only the second time we've paired together.

"Our first was a competition in South Korea in July, but we didn't do as well as we did here."

In the men's synchronised 10m platform, Wang An Qi and Gao Ang won gold with 376.47 points, with Indonesian and Egyptian pairs finishing second and third, respectively, in the three-team event.

China coach Wang Xiaosong said: "All our athletes performed to their normal standards today, so I'm quite happy.

"Although we won all three golds today, the whole process was tough and we will all focus and do well on all our dives tomorrow," added the former national diver, 36.

Lee, 21, said: "We are quite pleased with the performance given that we actually took a break after the world championships (in Kazan, in August).

"Also, in the prelims and semis, our dives were all very consistent and we felt that it was an improvement."

NEED TO UP THE GAME

Freida, 17, added: "We restarted our synchro training about two weeks ago after a break and were doing a lot of basics, so we are quite happy with the new PB since our previous PB in Kazan was 244.32."

The duo, who used their SEA Games dives yesterday, would have to increase the difficulty of their dives from now on, if they want to qualify and do well at the World Cup in February next year - it serves as a qualifier for the Rio Olympics next August.

National assistant coach Wan Jun said: "The gap between their current routines and those needed to qualify for the Olympics is quite big. "There will be some tough training ahead for them since they will need to increase the difficulty of every dive."

But Lee says they are up for the challenge.

The 21-year-old Singapore Management University undergraduate said: "It would definitely be a challenge, but we just have to try, because if you don't try, you never know.

"We have faith in our coach."

This article was first published on October 17, 2015.
Get The New Paper for more stories.