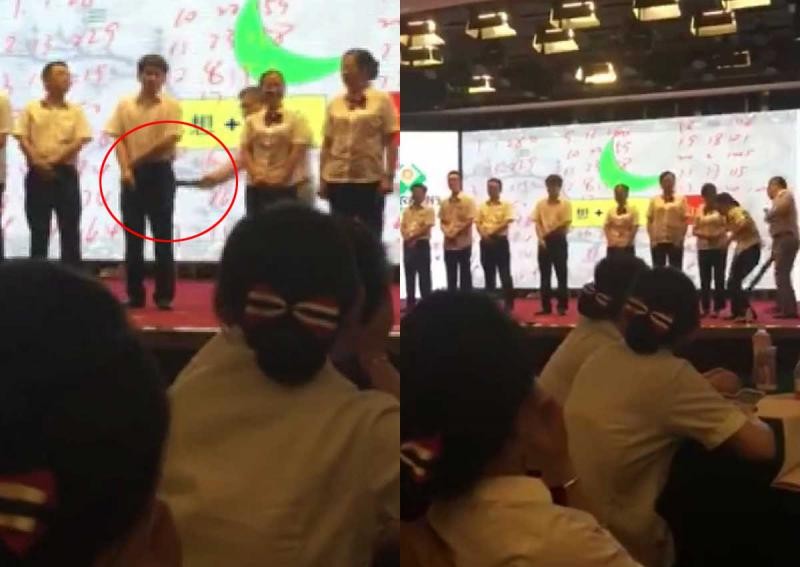 The wrongdoers are lined up in a row, and the superior lectures them before spanking them on their buttocks in the hopes of teaching them a lesson.

It sounds like a school public caning, but in fact was the punishment dished out by a Chinese motivational trainer to employees of a bank for "not working hard enough".

According to Sina News, the incident happened on June 18. Footage of the shocking incident was posted online and quickly circulated on Chinese social media.

In the video, the eight workers - four male and four female - are lined up on the stage of a hotel banquet hall, while their other colleagues are seated at tables.

According to Huanqiu.net, the eight were employees at the Shanxi Changzhi Zhangzhe Agricultural and Commerce Bank.

The trainer addresses the crowd and each of the workers on stage, before beginning his attack with what appears to be a large wooden stick.

He hits each of them on their buttocks four times before the video ends, and they can be heard crying out in pain.

At one point, one woman can be seen almost falling over in pain as her boss strikes her. When she tries to protect herself, the boss then shouts "move your hands away", before again whacking her.

According to media reports, the trainer also subsequently cut the women's hair and shaved the men's heads.

Some employers and workers in China were previously also reported to have gone to extremes when punishing or rewarding performances at work.

Remember when the workers from a car rental company who crawled on all fours on a street after failing to meet their sales target?

But on the other hand, some bosses seem to be on the other end of the spectrum, choosing to reward high-performing workers in extravagant ways, ranging from expensive cars, thousands of dollars worth of jewellery and even a night with an adult actress.