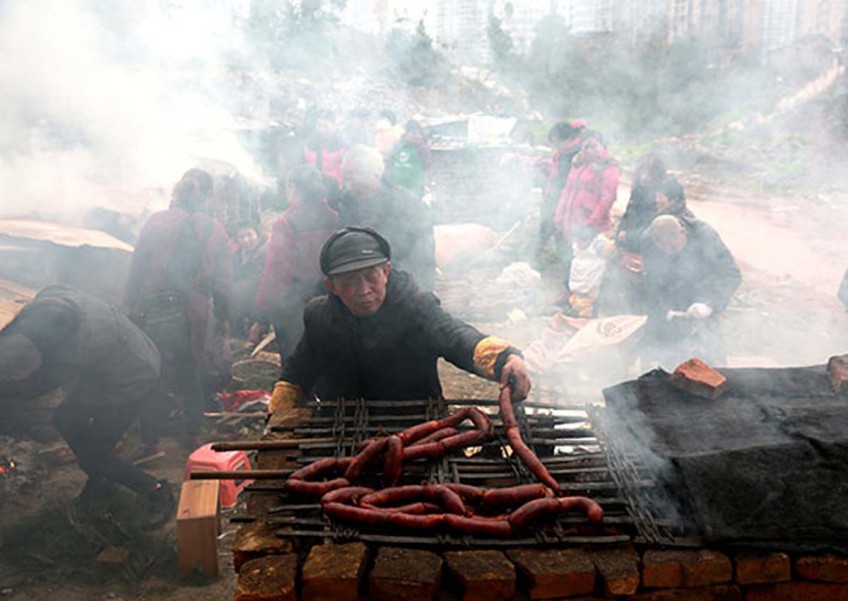 The environmental watchdog in Dazhou, Sichuan province, will provide more than 100 machines and equipment to allow residents to smoke meat in an enclosed environment without polluting the air.

The bid is aimed at reducing smog, since the practice of smoking meat contributes to pollution in Sichuan's easternmost city, according to Wang Huaiyan, chief of the city's environmental protection bureau.

Residents will be able to share the equipment, which will prevent smoke from escaping. Officials did not say whether use of the equipment will be free.

It is a tradition for people in Sichuan to eat smoked meat during Spring Festival, which runs from February 8 to 22 this year.

Each year, Fu Xiuqin, a 75-year-old resident of Chengdu, the capital of Sichuan, struggles to find sawdust and cypress twigs so she can smoke meat in the run-up to the holiday period.

Smoked meat has been part of the festival since she was a child. But it is difficult to find the sawdust and twigs, as well as a place to smoke meat, in the city of more than 10 million people.

In Dazhou, however, it is quite easy to find sawdust and cypress twigs on the city's Fenghuang Mountain.

"Almost 99 per cent of local families would smoke meat before the Spring Festival. People who smoke meat can be found from the foot to the top of Fenghuang Mountain," said Yu Canghai, a Dazhou city official.

During the run-up to the festival, the air in Dazhou is more polluted than usual. The local government has blamed the smoking of bacon as the major cause of smog since early last year.

Netizens have dismissed the claim, noting that bacon smoking was carried out several hundred years before smog appeared. Others have accused the government of shifting the blame for its failure to deal with air pollution.

Chen Housheng, a deputy to the Sichuan Provincial People's Congress, said: "There are many causes for smog in Sichuan. Meat smoking is one of the contributors to smog but not the leading one."

With instruments that measure PM2.5 - airborne particulate matter with a diameter of less than 2.5 microns that can penetrate the lungs and harm health - the researchers found that smoking bacon produced little or no PM2.5.

Additionally, they found that an individual site where meat was smoked did not affect air quality 50 metres away.