Coffee returns to the Stone Age in Korea 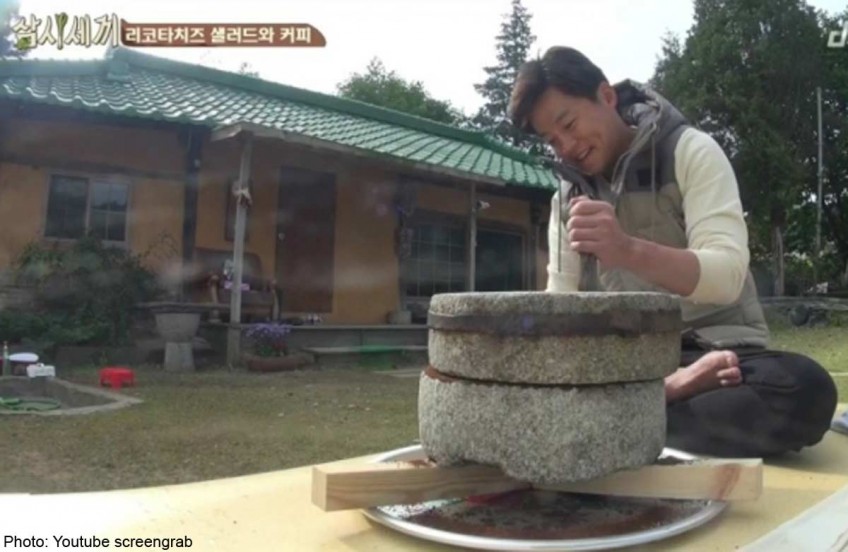 For 36 years, the Booheung stone company has been manufacturing stone goods from basalt rock originating in the Cheolwon area in Gangwon Province.

Recently, the company's most popular items have become its millstone ― or "maetdol" ― coffee bean grinders.

The maetdol, a stone device used to grind grains by manually spinning one rock atop another, was a popular agricultural tool in Korea in the Neolithic Age and throughout the Goryeo and Joseon dynasties.

Now, true to the cyclical nature of trends, the maetdol has made a comeback in modern Korean coffee shops, says Baek Sung-ki, a master stone craftsman and the CEO of Booheung.

"The maetdol can grind anything, from grains to seeds, nuts and beans," said Baek. "Who's to say it can't grind coffee?"

Many agree, it seems. More and more people are seeking his maetdol coffee grinders, said Baek, from local cafe owners looking to enhance the flavor of their coffee, to overseas buyers intrigued by the marriage of the ancient Korean device and the brown brew considered a staple drink of the West.

"They say the taste is much richer," said Baek.

Stone grinding results in a better retention of the original coffee flavor, proponents claim, as the bean fibers receive less damage from heat than they do in machine grinders.

Skeptics, however, say it is the fineness of the ground coffee grains that determines the brew's taste, rather than the material of the grinder. The more finely ground, the more concentrated the extracted liquid becomes; the more coarsely ground, the lighter the infusion.

The maetdol, having no settings to control the size of the grains, may not be ideal for those who are sensitive to such differences in density, opponents say.

On the other hand, in a blind test conducted on "Life Info Show," a KBS2 programme that introduces novelty items from around the country, the majority of those tested declared that coffee brewed from stone-ground beans tasted better. Some described the coffee as "heavier, with a stronger chocolate-like flavor, and less acidic" than that of machine-ground beans.

The maetdol coffee grinder gained further recognition through the popular cooking reality show "Three Meals a Day," in which actor Lee Seo-jin made hand-drip coffee out of maetdol-ground beans to serve to his fellow show hosts for breakfast.