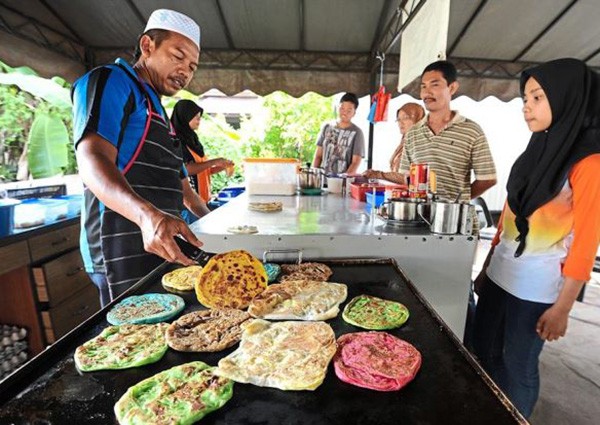 Since The Star reported about his unique roti canai, also known as roti prata, in Kampung Permatang Keriang in Penaga last September, people from as far as Kuala Lumpur, Johor and Terengganu have been flocking to taste his dish.

"I was pleasantly surprised when about eight visitors came from Brunei after reading the news online," said the 44-year-old trader.

"They were very friendly and asked me a lot of questions on the making of the roti canai and said they really enjoyed it," added Abdullah.

Since the news broke, business for Abdullah, who has been selling about 300 to 400 pieces on weekdays, has spiked.

"My sales during weekends and public holidays have increased from 700 to more than 800 now."

"The coloured roti canai attracts customers from out of town; the kampung folk and people nearby still prefer the normal roti canai," Abdullah said.

The creative trader started his business five years ago after retiring from a factory and started churning out the colourful roti canai, which he sells for RM1 (S$0.35) each, seven months ago. The stall is open from 7am to 11.30am daily.