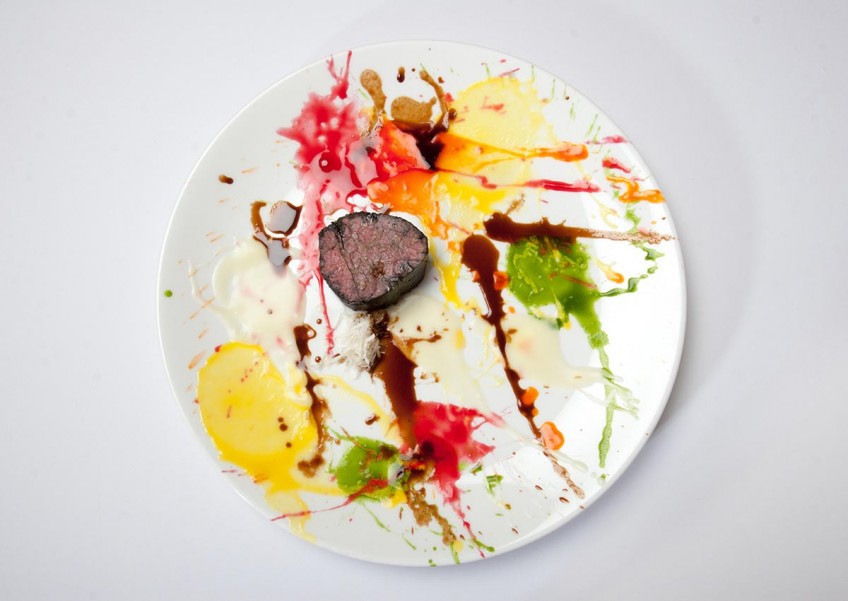 SINGAPORE - Chef Massimo Bottura is not an artist. He is an artisan, he says, but definitely not an artist. "An artist is free to do whatever he wants, but I have to create good food. I'm an artisan," he points out.

It's easy to mistake any of his dishes for a contemporary art piece, especially when they look and sound so much like one. Beautiful Psychedelic Spin-painted Veal, Not Flame Grilled was inspired by the English artist Damien Hirst, while Oops! I Dropped The Lemon Tart was inspired by Chinese contemporary artist Ai Weiwei - two of the many artists whose works are part of Chef Bottura's personal collection.

"If you have passion for something, you can transform it into vehicles to transfer emotion," says the 53-year-old chef, when asked how he started incorporating art into his food.

"It's not just about going into the kitchen, cooking, and serving. For us, it's an expression of culture. We use culture as a motivational force, and we put together our passion, like contemporary art, music, architecture, design, everything and we transform that into edible bites," he explains.

He brings up one of his dishes as an example - Tribute to Thelonious Monk, which was inspired by the African-American jazz player Thelonious Monk. According to chef Bottura, Monk's music was not well-received initially because its drum-like influence made it sound different from other jazz music. Some of his peers, however, considered him a genius because they realised his unconventional sound had depth. It was influenced by the tribal music of his roots as an African-American.

That's why the dish itself is a monochrome cod dish that shows up jet-black on a customer's plate. "But when you eat it, and you go deeper and deeper, there are so many layers of flavour, just like Monk's music," says the chef.

Chef Bottura traces his own roots in the culinary world back to when he was growing up in Modena, Italy. "My mother and grandmother cooked extremely well, that's probably why I became a chef. Because the quality of the ingredients and the food they were serving was extremely good, so my palate was very stimulated. They transferred that passion to me, that's why I didn't want to become a lawyer like my father wanted," he reveals.

Now, chef Bottura is hailed as one of the most influential Italian chefs in the world, and his three-Michelin-star restaurant Osteria Francescana (where he is chef-patron) has won many awards including number two on this year's San Pellegrino World's 50 Best Restaurants list. And recently, he made a trip to Singapore to cook at the inaugural Shangri-La International Festival of Gastronomy 2015 from Oct 27 to 31.

One of the most important aspects of his cooking philosophy, says the chef, is that while he remains rooted in his traditional Italian background, he looks firmly towards the future with his molecular gastronomic techniques.

The analogy he chooses to illustrate this is, of course, related to an artwork - Dropping a Han Dynasty Urn by Ai Weiwei, where a series of prints show a man dropping and breaking a 2,000-year-old Han dynasty urn. Through that provocative piece of work, chef Bottura says the artist was trying to convey that he was "not breaking the past, but transforming it. (He) is recreating the past through a contemporary life, and in doing so, creating a new tradition for the future".

This article was first published on November 7-8, 2015.
Get The Business Times for more stories.