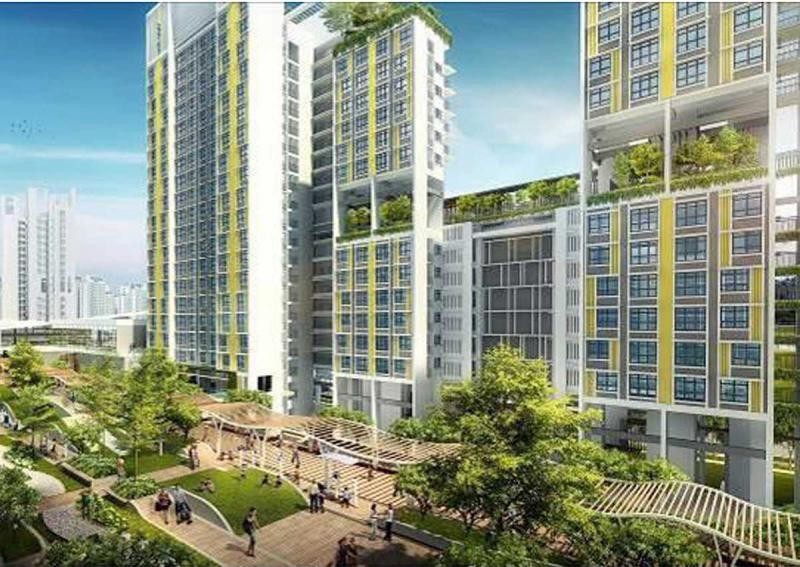 SINGAPORE - Property market observers were all agog on Wednesday about a choice commercial and residential site along Upper Serangoon Road right next to Woodleigh MRT Station that will be launched on the confirmed list in December this year.

It is for a mixed-use development that could yield an estimated 825 private homes and about 15,000 square metres gross floor area (GFA) of commercial space.

This will provide retail amenities for the future live-in population of the Bidadari HDB estate, the Ministry of National Development (MND) said.

The proposed mixed-use development will be integrated with about 8,200 sq m of community and institution uses; market watchers reckon this could be for a future community club.

Property consultants expect the 2.55-hectare land parcel to fetch anywhere from five to 18 bids. Their forecasts for the highest bid ranged from S$750-920 per square foot per plot ratio (psf ppr).

This is one of four new sites introduced by MND in its line-up for the second half 2016 Government Land Sales (GLS) Programme.

Another hot new site is a 0.4-hectare plot at the junction of Perumal and Race Course roads, next to the Farrer Park MRT Station. This can generate about 200 private homes in addition to about 500 sq m GFA of commercial space.

SLP International executive director Nicholas Mak said he expects this site to be the most popular among developers of the three private condo sites in the confirmed list of the H2 GLS Programme due to its relatively small size and hence more manageable investment outlay.

Agreeing, Savills Singapore research head Alan Cheong said: "Using the Sturdee Road site that was awarded to SL Capital on March 31, 2015 as a comparison, the benchmark for this new plot could be about S$800 per square foot per plot ratio (psf ppr) or about S$141 million.

"As the investment quantum of this land is considered small, the number of bidders could be in the teens."

DTZ director and regional head (South-East Asia), research, Lee Nai Jia, expects the top bid for the site to be S$770-780 psf ppr. The Perumal Road site is slated for launch on the confirmed list in November.

Confirmed-list sites are launched for tender according to schedule regardless of demand.

Reserve-list sites, on the other hand, are tendered out only upon successful application by a developer or when there is sufficient market interest in a site.

MND will also be offering two new sites on the reserve list in the second half of this year. One is a 2.81-hectare site along Serangoon North Avenue 1, flanked by the Serangoon Garden landed housing estate and public housing flats.

It can generate a whopping 825 homes. The large size, coupled with the land parcel being "quite far" from MRT stations, said Mr Mak, means this plot is unlikely to be triggered when it is made available for application in October 2016 - given current market conditions. That said, in the event that the site is launched in the second half of this year, OrangeTee's senior manager for research and consultancy Wong Xian Yang predicts it could fetch about S$770-820 psf ppr.

The other new plot on the reserve list will be along Toh Tuck Road in the Upper Bukit Timah area. It is designated for a low-rise private condo project with about 325 units and will be made available for application in November. Located about 500 metres from the Beauty World MRT Station on the Downtown Line, this site has a land area of 1.87 hectares.

OrangeTee's Mr Wong expects it to garner five to 10 bids with the highest coming in at S$740-790 psf ppr, if the site were to be triggered in the next six months.

"The nearest comparable project would be the Creek @ Bukit, which is a freehold project and is expected to be completed in 2017. Launched in November 2013, the development is currently 52 per cent sold with the median transacted price at around S$1,631 psf," he added.

Mr Mak ventured that since the government is sticking to just four sites in the confirmed list, there is a possibility that one or two reserve-list sites could be triggered for tender by developers who want to replenish their land bank.

He tips the Toh Tuck Road plot as well as the Margaret Drive private housing site - which is already on the current H1 reserve list and which will be rolled over to H2's reserve list - as the more likely sites to be triggered.

The Margaret Drive site has a land area of 0.48 hectare and is estimated to generate some 275 private homes.

This article was first published on June 09, 2016.
Get The Business Times for more stories.