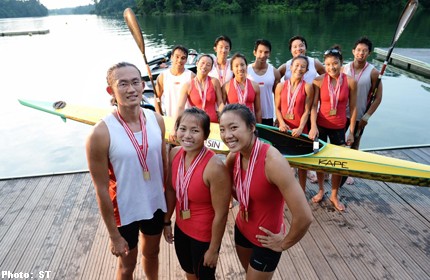 SINGAPORE - While most of Singapore are still soundly asleep at five in the morning, a group of young men and women drag themselves out of bed to paddle furiously in their kayaks until their arms ache.

And they are back in the water again in the evening to do more of the same thing.

The national team trainees repeat the punishing twice-a-day rowing routine for six days a week at their training venues at Kallang Basin and MacRitchie Reservoir.

Watching closely over them is national coach Balazs Babella, the 2005 and 2007 world champion in the K4 (four-men kayak) 200m event. The 35-year-old Hungarian said: "I admire the team's extreme commitment. If I were in the same situation as them, I might not be able to make the same sacrifices."

Since his appointment in 2008, Babella has raised the standard of kayaking, which is governed by the Singapore Canoe Federation (SCF).

He has upgraded the kayakers' technique with video analysis and improved their power with weights equipment specially tailored for the sport.

In their SEA Games debut in 2007 in Thailand, Annabelle Ng and Geraldine Lee won the Republic's only kayaking medal, a bronze, in the K2 (two-women kayak) 500m event.

Kayaking did not return in the 2009 edition of the Games but, in 2011, the team harvested two golds, three silvers and a bronze.

Two weeks ago, there was even more evidence of the team's rise when they returned from the South-east Asian Canoeing Championships in Palembang, Indonesia, with a haul of seven golds, four silvers and a bronze, in a dress rehearsal for December's SEA Games in Myanmar.

This has led to optimism from SCF vice-president Zason Chian, who predicted: "We are aiming to better the 2011 haul by winning at least three golds (from 11 events) in Myanmar.

"Our athletes are either working or studying. They take no-pay leave, some put their studies on hold... all for the sake of the sport. The funding they get is quite minimal. They are driven solely by their passion."

To further hone the 12-man team's skills, they will compete in the Asian Canoeing Championships in Uzbekistan in September.

"We are not going to Myanmar as tourists," Babella stressed. "We are a country that is still trying to be known in Asia but, if these athletes have the belief, they can win gold medals at the SEA Games."

The coach also pinpointed Indonesia, Thailand, Vietnam and hosts Myanmar, who won four golds in the 2007 edition, as the teams to beat this year.

Leading the charge in Myanmar will be Lee. The 26-year-old won Singapore's first SEA Games kayak gold in 2011 when she topped the K1 500m race.

She also blazed a trail last year when she became the first Singaporean in her sport to compete at the Olympics.

In between competitions, she has to balance sport with her work at the Land Transport Authority, where she is a deputy contract manager liaising with MRT contractors.

She said: "It helps that we are a closely-knit team. The training is really tough but the bonds we forge have made it enjoyable."

There is also Lucas Teo, who is going slow in his studies so as to go faster in a kayak.

The 22-year-old second-year life sciences undergraduate at the National University of Singapore won the 2011 SEA Games silver in the K1 (one-man kayak) 1,000m will be taking fewer modules in school as he aims for the gold this time.

Teo said: "I will graduate one year after my peers but this is purely about following my passion."

As for 21-year-old NUS medical student Wilona Lee, who sleeps about four hours daily to balance studies and kayaking, she believes all the sacrifices will come to fruition.

She said: "We are better prepared this year and there is continuity as Balazs has coached us for the last five years.

"We train together, we suffer together and we have bonded together as a team.

"The three-gold target at the SEA Games is definitely achievable."