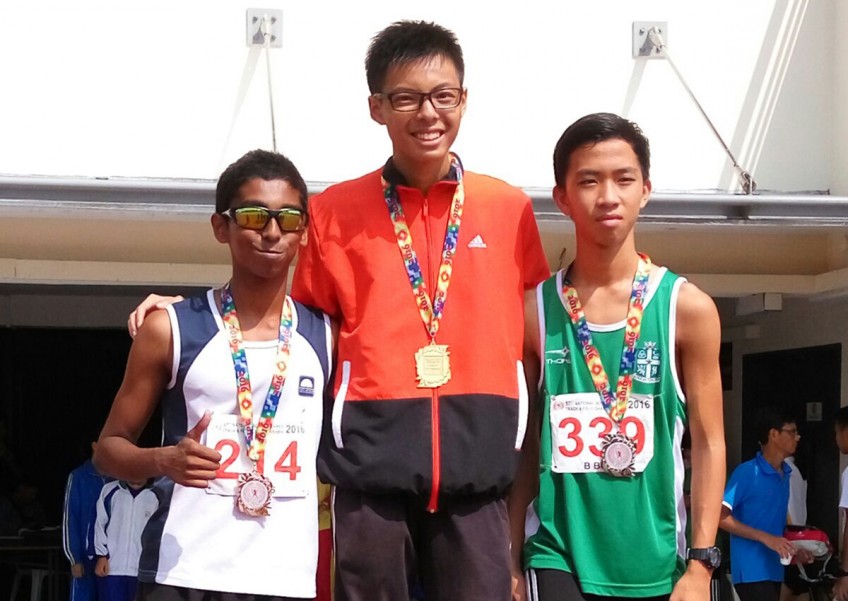 It was Commonwealth's first track and field gold in 15 years, after Suriya Prakash won the B Division 3,000m event in 2001.

Yiyang, 16, said: "I feel extremely proud to have brought the school gold. Everyone's been really supportive of me and I'm so happy to be able to pay them back."

Having ended the gold drought, Yiyang - who then went back to school to sit for a history exam - believes neighbourhood schools can still triumph at the national meets.

He said: "You don't need to be from a big school to win gold. If you look at Hussein and what he did in cross-country, it's a clear example.

"I was inspired by him after that to do well in my races and give it my all to get my first gold."

A national record was also smashed yesterday when Victoria Junior College's Vanessa Lee lowered the 2,000m steeplechase women's U-20 mark (7:38.16) in the A Division girls' final (pending ratification). She beat her own national mark of 8:00.94 set last year.

Hwa Chong Institution's Ow Yeong Wei Bin was another record-breaker as he took gold with a time of 54.19sec in the A Division boys 400m hurdles. Coincidentally, he erased the previous meet record of 54.56sec set by his older brother Yu Xiang in 2013.

The championships will end on Friday at the National Stadium with events like the 100m, 800m and 4x100 relay races scheduled.

This will coincide with the 11-day block of athletics events held at the 55,000-seater stadium. Besides the April 28-29 Singapore Open Track and Field Championships, the National Stadium will host the ActiveSG Athletics Fiesta from April 30-May 1 before the May 4-8 Asia Masters Athletics Championships.