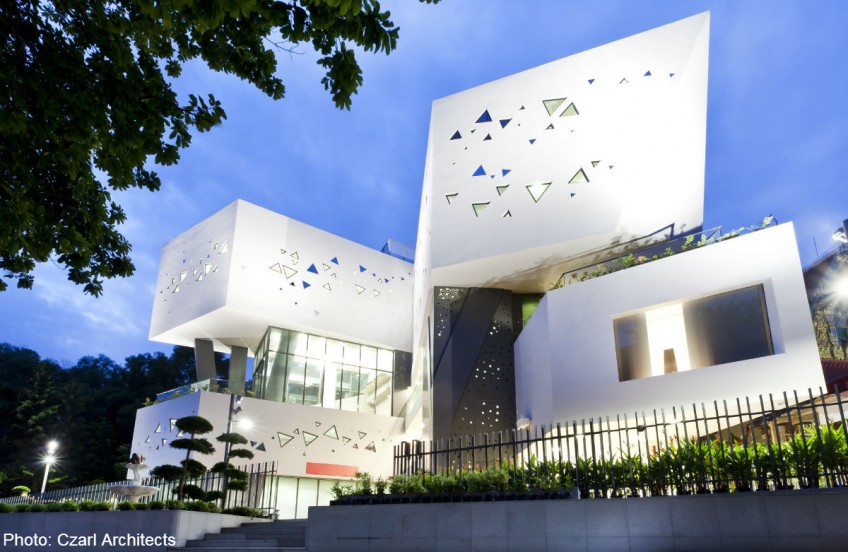 Inspiration from the Bodhi tree: The temple extension has a V-shaped plan, and is staggered on each level, resembling a tree with branches spreading out. The triangular cut-outs in the facade are windows.

That looks can be deceiving is an understatement when you look at the new extension of the Wat Ananda Metyrama in Jalan Bukit Merah. Instead of traditional ornamental roofs, gold leaf inlays or intricate carvings, you see a futuristic, cube-like structure that's more luxury condo than place of worship.

The design, however, was not about trying to break new architectural ground. Instead, Mr Lim and fellow architect Anditya Dwi Saputra followed in Buddha's footsteps and sat under a Bodhi tree - which is planted in the grounds of every Buddhist monastery - for inspiration.

"We sat under it and looked up, and discovered various features of the tree, which we incorporated into the design of the building," says Mr Lim.

The five-storey building has a V-shaped plan, and is staggered on each level to make it look tree-like, with branches spreading out.

It houses a dining hall, a museum, a Dharma hall and meditation hall, as well as the monks' abode on the upper floors. Sky gardens, long planters are also incorporated into the design, which Mr Lim says "gives the illusion of an urban 'tree' building, one that offers a visual relief to residents nearby".

Triangular cut-outs in the facade are in fact windows. "We noticed that when sunlight streams through the Bodhi tree, the shadow cast on the ground is shaped like a triangle," says Mr Lim. "Hence, the shape of the windows."

While they look randomly positioned, the windows are actually angled in such a way as to catch the right amount of natural light as required for the interior space. "The constant changing and dramatic play of light and shadow through these windows can be best experienced in the prayer halls, reminding oneself that change and impermanence of life is the only constant."

An aluminium screen by the side of the building has leaf-shaped cut-outs, again inspired by the leaves of the Bodhi tree. The cut-outs are there for ventilation.

Mr Lim points out that the windows' and building's geometric shapes are inspired by traditional Thai temple architecture, such as its pitched roof.

This entry into the World Architecture Festival almost didn't happen. Mr Lim was undecided about nominating it for an award. "We missed the deadline, but by luck, the WAF office said their server was down, and so they were extending the deadline for another week. I guess it must have been a sign," he quips.

Ko Shiou Hee likes to tell the story of how he used to drive by Christ Methodist Church on East Coast Road regularly but never noticed it before. Even on the day the architect was scheduled to present his new design for the building, he recalls: "I drove past the building without realising it."

Not anymore, because the director at K2LD Architects has made sure that the church is no longer a "blink and you miss it moment" especially for new parishioners.

The church - which resumed services last month - now has a very contemporary facade, shaped like a wave and clad in aluminium strips, with little crosses on it that light up at night. The aluminium cladding goes all around the church, which not only works as a sun screen, but adds visual interest to the neighbourhood.

"The image of a church is important, hence I wanted a facade that stands out," says Mr Ko. "The wave-like structure is like a veil, which will unveil the church."

The 84-year-old church had outgrown itself, and the best solution was to tear down the old and build a new one. Mr Ko's design was selected from a competition. Apart from its unusual facade, another interesting feature is the use of Peranakan tiles on the floor. "The church committee wanted to bring in the East Coast charm," says Mr Ko. "This makes the church different from others in Singapore."

He also designed the church to have lots of open space, which allows for the breeze to flow through, as well as for the church to be naturally lit in the public areas. The new sanctuary on the second floor can now accommodate over 900 people, more than twice as many as before. While the previous sanctuary was long and narrow, Mr Ko designed the new one to be wider but shorter. The downside is a shorter aisle, but this means that church-goers are now closer to the stage. "It will be difficult now for anyone to fall asleep during service," he quips.

At the centre of the sanctuary is a stained glass panel of the cross, which was already in the church. "Surprisingly, it looks modern which fits in with the church's contemporary look," says Mr Ko.

The remaining floors of the church house classrooms and a few auditoriums.

The new church has not only received good reviews from its parishioners, but also a new nickname. "People now call it the Church of the Little Crosses," says Mr Ko.

In the Star Wars movie series, Sandcrawlers are huge treaded fortresses used by the Jawas as transportation and shelter. The Sandcrawler building at one-north, which is the regional headquarters for Lucasfilm Singapore, looks like a sleeker version of its movie counterpart. Ironically, the building was not modelled after The Sandcrawler. It was christened thus after Lucasfilm took a poll among its staff here.

There is a reason why its architect, Andrew Bromberg, an executive director at Aedas, designed a horseshoe plan for the building. This was done to draw in natural light and comply with master plan requirements, while creating a lush tropical garden enclosure.

Visually stunning, the Sandcrawler's external metallic facade is fashioned out of low-iron insulated glass with an inner metallic frit layer, providing good solar protection and privacy on the more exposed faces. The courtyard facade is more contained and private with highly transparent glass and overhanging terraces that shade the lower levels.

At the horseshoe's tips, a series of overhanging terraces are draped with luxuriant foliage. Office folks get spectacular garden views, while the terraces also provide great civic space - a luxury that most office buildings do not have. Inside the building, space is carved out to create an expressively contoured 100-seat theatre for screenings, performances and other events for Luscasfilm staff as well as other commercial tenants.

The building, owned by Lucas Real Estate Singapore, naturally has reminders of film-making legend George Lucas in it. They include a bronze Yoda statue that sits in the middle of the lobby.

Step into the lift lobby and visitors may think they are in a Star Wars movie set. The area is reminiscent of the Death Star, with its white, metallic panelling and lights illuminating the sides every time the elevator arrives.

As the regional headquarters of one of the world's leading entertainment companies, the building makes a unique statement while commanding a strong presence within the one-north vicinity.

From the outside, Oxley Residence looks like yet another sleek condo, but its architects say the site came with many challenges.

For one, it is near Minister Mentor Lee Kuan Yew's home, which meant that the Residence needed to fulfil certain design requirements for security screening reasons. The Oxley Road site is also at a T-intersection with Lloyd Road, hence the need for a grand vista and it has three mature trees that cannot be felled. To top it off, the front half of the land was zoned for landed housing, while the back was zoned for low-rise development.

"Keeping in mind the unique planning requirements, we set out to design a set of four houses at the front end, one for each of the four owners who are brothers," says Melvin Tan, a director at the firm.

Oxley Residence comprises four strata houses, each with two storeys and an attic, and a five-storey condo behind. To deal with security screening, the architects put in angled aerofoil louvres on the strata houses to create a "veil" akin to an organza sheer, instead of the conventional way of putting up blinds. The louvres work to provide privacy in a more elegant manner.

Rather than display the four houses in a typical terrace house manner, which is to line them up side by side, the architects designed them to interlock. "We thought of the house, its functions and voids as pieces of a jigsaw puzzle," says Mr Tan. "The pieces were then put together in an interlocking manner so when you look at it from certain angles, you only see two houses instead of four." He adds that this interlocking design created a more private and exclusive feel to the houses.

And as for the trees that have to stay, "the buildings were positioned respectfully away from them so that they could remain healthy", says Mr Tan.

What's a common look for condominiums these days? Full-height glass windows with shiny finishes, which homeowners subsequently block off with curtains, often ugly ones, just so they have some privacy?

Goodwood Residence, along Bukit Timah Road and next to Goodwood Hill, has none of that. Instead, the units come with operable screens made from aluminium tubes powder-coated in a mix of warm ochre tones, making the facade seem like a piece of woven textile. Woha Architects say they were inspired by the patterns of traditional Asian woven textiles and the external bamboo-chick blinds of the black-and-white colonial houses in the vicinity.

The screens are more than mere aesthetics. There are moveable sections that pivot upwards to create an overhang that filters Singapore's overcast skies, while giving uninterrupted views, or they can be left down for greater privacy. Taking inspiration from the lush greenery of its surroundings, there are 15 units, on the second and third storeys of the development, that are designed with "treehouse cabanas" perched amidst the treetop canopies.

Green is a strong feature in this development: besides preserving 55 trees from the original site, another 500 new ones were added. There's also extensive vertical landscaping, as well as a grand central lawn at its heart. Nearly 80 per cent of the estate is devoted to landscaping and communal facilities.

Even the individual units feature wide planters in projecting balconies for added greenery and also to provide shade for the apartments below. Other environmentally-friendly features in the condo include harvesting rainwater to water the plants, and the use of separate chutes, one for organic waste and the other for recyclable wastes. No surprises, then, that Goodwood Residence has been awarded the Green Mark Platinum Award by the Building and Construction Authority of Singapore.

This article was first published on July 12, 2014.
Get The Business Times for more stories.