Confident Oman take it all in stride 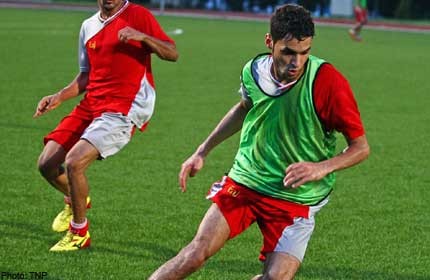 Youngster Ali Busaidi (above) was a livewire at Oman's first training session at the Singapore Sports School pitch on Friday.

SINGAPORE - They did struggle with the speed of the ball at times, and on more than one occasion, a chipped pass skidded strangely off the plastic turf at the Singapore Sports School on Friday, calling an abrupt halt to their slick passing moves.

Oman's passing was mostly crisp, though.

Switching positions, their players moved effortlessly and their one-touch play was refreshing, even if it failed to come off a few times.

Paul Le Guen's Oman looked sharp in their first training session ahead of the Group A Asian Cup qualifier against Singapore at the Jalan Besar Stadium next Wednesday.

The Middle Eastern side are dealing with jet-lag and injured players, but Le Guen highlighted Jalan Besar's artificial surface as one of the key issues his side will have to deal with next week.

"It will be difficult, it's tough to get a good result over Singapore at their home ground - they are used to the artificial pitch, and while some teams are used to it, we are not one of those teams," the Frenchman told The New Paper on Friday.

"The atmosphere at the stadium will be good and that will make it hard to get a result, too."

While the 49-year-old was concerned about the pitch, youngster Ali Busaidi focused on the impact of the new Singapore regime.

The German has already started to lay the foundations for a change in football philosophy and the big test will come against Oman - his first competitive match in charge of Singapore.

The German is in the process of installing a dominating style of one-touch possession football, and has brought in a host of young players like LionsXII forward Shahfiq Ghani, 17-year-old French-based Adam Swandi and Courts Young Lions' duo, Sahil Suhaimi and Anumanthan Mohan Kumar.

"Football across Asia is improving, and this Singapore team are not likes ones before, I think they are a better side," said Busaidi, 19. "It's sometimes a positive thing when a new coach comes in and puts in place what he wants to see, and one thing is for sure: players want to show him that they are the best players.

"But sometimes (the change) can also have a negative effect."

Hassan Mudhafar, the 33-year-old Oman captain, is unconcerned about factors beyond his control.

He is focused on the good vibes coming out of his camp.

Confidence is the buzzword, as Oman look to win their second successive match in the group, after beating Syria earlier.

"We are definitely hoping for a win," he said.

"There's a good balance of older players and young ones in the team, and the older ones are helping out.

"We're quite confident of winning this match, and the confidence is building up in each training session leading up to the game."

The timing of the match is not ideal, coming a few days after the end of the Muslim fasting month of Ramadan.

He said: "It is hardly ideal, but I respect the culture and we took that into consideration in our training sessions. Despite everything, we are confident that we can win."