IPRS has presented the PRISM Awards biennially since 1987 to recognize the best in PR efforts in Singapore and the region.  PRISM 2019 saw a record number of entries and nominations for its 32 categories, including eight new categories, that spanned a wide spectrum of competencies in the PR and Communication sphere including corporate reputation and corporate responsibility; social/digital media campaigns; integrated, B2B and B2C campaigns; and crisis and issues management.  The award categories covered the public sector, the corporate field, as well as the not-for-profit arena.

A distinguished panel of judges comprising seasoned PR and Communication professionals, selected a total of 47 entries for the Excellence (14 winners) and Merit (33 winners) awards.  Fifteen awards were also presented to individuals for their achievements and contributions in the field of PR and Communication by the IPRS Council.  The winners received their awards at a gala presentation ceremony held at the Mandarin Orchard Hotel this evening.  Mr Seah Kian Peng, MP for Marine Parade GRC and CEO NTUC FairPrice Co-operative, was the Special Guest. Among the 300 guests present were the heads of National PR associations from Malaysia, Indonesia, Vietnam and Hongkong.

"The Institute is heartened by the strong support by the industry for the PRISM Awards. There were more entries. The distinguished panel of judges found more entries to be worthy of recognition. There was great support from our members and their clients and guests, and from sponsors. This goes to show that the PRISM Awards is growing and is relevant as a benchmark for professionalism in our industry," said Mr Robert Conceicao, President, IPRS Council 2017/2019.

Among the Award recipients were:

The full list of PRISM Awards 2019 recipients can be found at https://www.iprs.org.sg/prism-awards-2019-winners/ 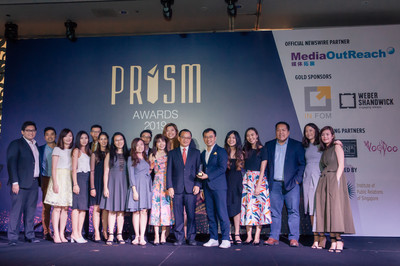 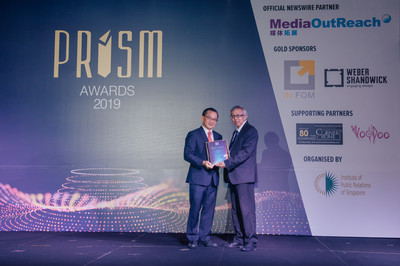