SEOUL, KOREA  -  Media OutReach  - 1 February 2019 -  Twitter is the best place for fans all over the world to find out and talk about what's happening in the K-Pop world in real-time. Last year, the most Tweeted personality on a global scale was K-Pop band BTS (@BTS_twt ). There were also 56 million Tweets worldwide related to "2018MAMA" in December 2018, which is the biggest K-Pop award ceremony every year. Additionally, the live Twitter Blueroom for K-Pop band EXO (@weareoneEXO ) in November 2018 was watched by 1.5 million people, setting the record for the most watched K-Pop #TwitterBlueroom ever.

With K-Pop being one of the top global conversation drivers on Twitter, the platform has now extended its In-Stream Video Ads to K-Pop content. This will allow brands around the world to now run pre-roll video ads targeted at users who watch K-Pop content on the platform. Aside from increasing the profit of video content copyright holders on Twitter, it also enables brand advertisers to easily reach a young, high-engagement consumer audience who wants to support their favourite K-Pop bands by watching related videos on Twitter.

To further provide advertisers a chance to maximise their campaign efforts, the platform also extended In-Stream Videos Sponsorships to exclusive Twitter-produced K-Pop content, allowing brands to insert pre-roll ads into video highlights of K-Pop #TwitterBluerooms . These exclusive live Q&A sessions on Twitter with over 200 K-Pop artistes and their fans have established engaging conversations worldwide, with an average of 1 million viewership for each K-pop #TwitterBluerooms in 2018. For example, in December 2018, LG U+ was the first brand to work with Twitter on this new advertising tool. Through the first sponsored Twitter K-pop Blueroom, LG U+ introduced their new performance video platform, U+ Idol Live , on a global scale to K-pop fans, accumulating up to 1 million views.

"In-Stream Video Ads and Sponsorships for K-Pop content will be the new marketing opportunity for brand advertisers to target young, high-engagement consumer audiences in the global market," said Yeonjeong Kim, Head of Global Content Partnerships in Twitter Korea. "In particular, we will focus on providing live #TwitterBluerooms , behind the scenes of K-Pop artists as well as K-Pop music content that has strong entertainment value and high cultural influential power on Twitter." 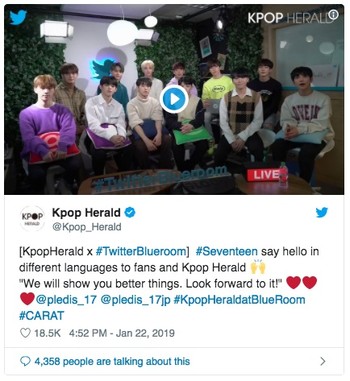 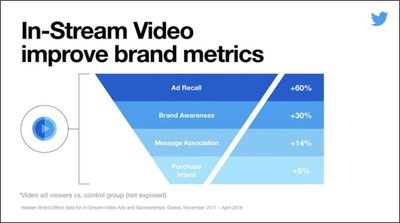