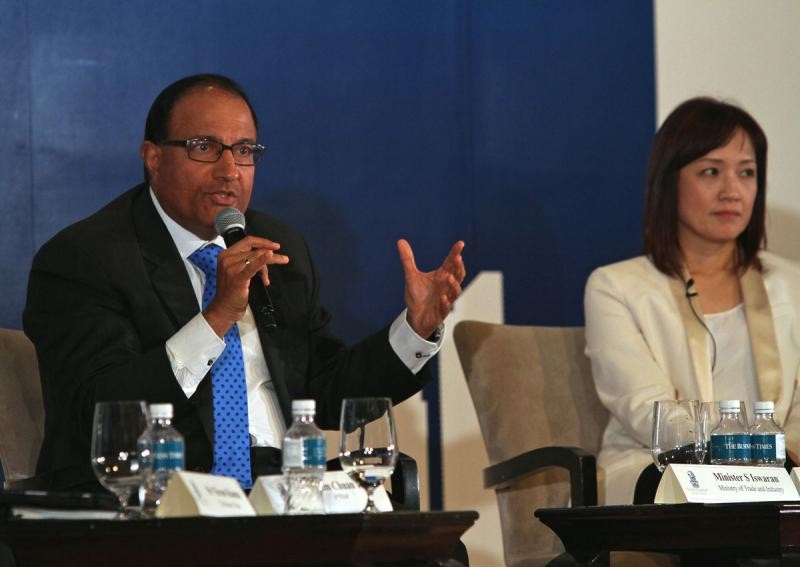 Singapore must create a mindset and culture that embrace innovation in businesses and their staff in order to prepare for the economy of the future, said Minister for Trade and Industry (Industry) S. Iswaran yesterday.

He told a forum of 300 business leaders that the country can navigate challenges in a period of transition for economies, industries and jobs, but it will require a national effort.

"The 'mindset' aspect is going to be very critical going forward, and it's not something that (the Government) can just dictate. It has to be something that pervades all levels of our society," he said.

He noted that Singapore has certain advantages in dealing with the changes, including its status as a well-connected and trusted regional hub that is well positioned to benefit from South-east Asia's rapid growth, as well as an ecosystem supporting research and development.

But Mr Iswaran, who is co-chair of the Committee on the Future Economy, stressed that beyond technical capabilities, Singapore will have to grapple with creating a culture that welcomes innovation. "What is the aspiration of the student? What is the messaging that the teacher gives the classroom? What is the tone set by the boss in a (small or medium- sized enterprise) as much as in a (multinational)? What is the general tone in society when it comes to undertaking risks venturing into new areas? This is where a lot of the evolution needs to take place in our society."

Standard Chartered Bank's Singapore chief executive Judy Hsu, a fellow panellist, sought to debunk the perception of banking as boring and traditional. She asked the audience to imagine being able to do banking by commanding a mirror to show them their bank account balances and financial goals. "In other words, I can brush my teeth and do all my banking at the same time. You'd think we are many years away from that but, in fact, our innovation lab already has a prototype of a two- way mirror, and it could be happening very quickly."

She pointed to "soft skills" like cultural awareness that would stand Singaporeans in good stead for the new economy. "We want to encourage younger staff to take assignments overseas. And that's always a challenge... many Singaporeans are less mobile than (people of) some other nationalities. We are doing more to encourage that so that when they come back to Singapore, they have a much broader international mindset."

Agency for Science, Technology and Research (A*Star) chairman Lim Chuan Poh, another panellist, said he was "very optimistic about the future of Singapore because of the younger generation". He recounted his experience interviewing candidates for the A*Star scholarship over the past decade, saying he used to encounter young people who craved job security. A*Star scholarship holders of recent times have changed, he said, citing one who said he was launching a start-up and hiring a professor who had tutored him.

Mr Iswaran urged business leaders to make suggestions to the Committee on the Future Economy, noting that since January, it has engaged over 2,000 stakeholders in around 60 face-to-face sessions.

This article was first published on June 01, 2016.
Get a copy of The Straits Times or go to straitstimes.com for more stories.