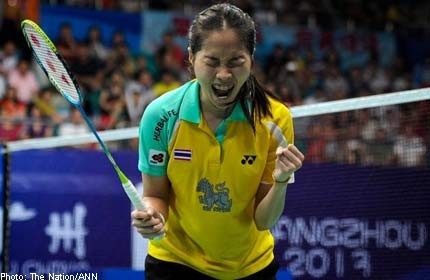 THAILAND - Teenage badminton prodigy Ratchanok Intanon made the country proud yesterday after she stunned world No 1 Li Xuerui of China to become the youngest World Badminton champion in history.

At 18 years, six months and six days, the precocious Ratchanok relied on her court skills, wits and consistency to beat the London Olympics gold medallist 22-20 18-21 21-14 in a hard-fought women's singles final showdown in front of a heart-broken Guangzhou crowd.

Ratchanok, or "May", entered the final as the underdog with a humble record of 1-4 against the 22-year-old Chinese, who beat her in their last four meets.

And it appeared to be the same old story when the Chinese ace romped to a 19-12 lead in the opening game before the world No 3 started her revolution.

The Thai teenager, with her back against the wall, proved she had the heart of a lion as she intensified her attacks to exert pressure on her more experienced rival. She saved three game points at 17-20 and reeled off five points en route to running away with the game to everyone's surprise.

Although Li took charge in the later stage of the second game to level the tie, she could not live up to the intensity and hopes of Chinese fans, who were expecting to see the title fall into the hands of their player for the ninth consecutive year.

Uncharacteristic errors kept tumbling from the Chinese racquet while the Thai, who stuck to the game plan of her on-court coach Xie Zhi Hua of China, combined a fierce and solid game to easily win the showdown after 65 minutes.

Ratchanok was in tears after the biggest victory in her career. She returned home last night in order to attend a Mother's Day ceremony at Amphorn Gardens this morning, where she will receive a "Grateful Child" award.

"I am going to bring my victory to my mother and godmother as a gift," Ratchanok said during an interview with foreign media.

"Before this match I didn't have confidence when I was competing against the top players, but after today I will. Li was not playing like herself. I felt really relaxed and I think she was nervous. I have played her five times and she has won four, so it was amazing that I beat her today."

"Being the champion has been my dream," she said. "At the end of the match all the tough moments from all the years came into my mind and I thought, 'Finally, I've got it.'"

Apart from reaching a career-high ranking of No 2 this week, Ratchanok will be awarded a Bt1 million incentive from the government plus a Bt500,000 bonus from new Badminton Association of Thailand president Khunying Patama Leeswadtrakul.

Born on February 5, 1995, Ratchanok was raised in the Banthongyord sweet factory, where her parents were workers. In concern for her safety, factory owner Kamala Thongkorn, her godmother, sent the young Ratchanok, then 5, to train free of charge with other kids at the Banthongyord Badminton School.

With strict training and her talent, it did not take long for the girl to shine in the international arena. She became World Junior champion at only 14 in 2009, the youngest in history, and dominated the event for the next two years.

She gained national recognition with a formidable performance at the London Olympics where she engaged in a tough three-game battle with world No 2 Wang Xin of China, before losing in the quarter-finals.