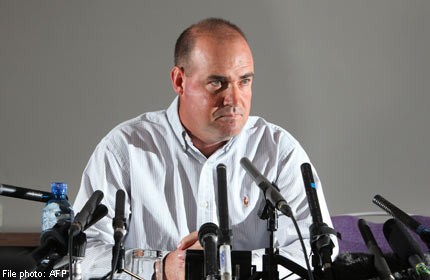 SYDNEY - Australia's first foreign-born coach Mickey Arthur confirmed on Wednesday that he was suing Cricket Australia for racial discrimination after being dumped from the job, while blasting the leaking of explosive case details to the media.

The South African was sacked just 16 days before the first Test against Ashes-holders England at Trent Bridge this month and replaced by former Australia batsman Darren Lehmann.

His Australian-based lawyers said proceedings were filed with the Fair Work Commission (FWC) last week "on a number of grounds for being sacked and scapegoated".

"The grounds include racial discrimination," Harmers Workplace Lawyers and Arthur said in a statement.

Reports said Arthur, fired two years before his contract was due to expire, was seeking up to A$4 million (S$4.63 million) in compensation, claiming he was discriminated against because he was South African and "didn't understand the Australian way".

According to Australian broadcaster Channel Seven, the legal documents also reveal a major rift in the team between captain Michael Clarke and former vice-captain Shane Watson.

Clarke allegedly described the role of Watson and his faction as a "cancer" with Arthur calling himself the "meat in the sandwich" between the conflicting camps.

Arthur said he was upset the details had been leaked as he wanted the matter to be settled privately.

"I am extremely upset and disappointed that confidential documents appear to have been given by others to the media," he said.

"The matters raised in my application to the FWC concerning issues within the Australian cricket team are very sensitive, which is why I was at pains to keep them confidential, especially at this time.

"I have kept them confidential, unfortunately others have now made them public," he added.

"I want to stress how important to me the members of the team were, and still remain to me. The welfare of the Australian cricket team is upmost to me."

Cricket Australia said it was "disappointed that it's come to this".

"But Cricket Australia is confident in its position on this matter and is sure it will get resolved in an appropriate manner."

When he was sacked, Arthur went quietly, admitting he had been "shocked and shattered" and had no idea he was about to lose his job.