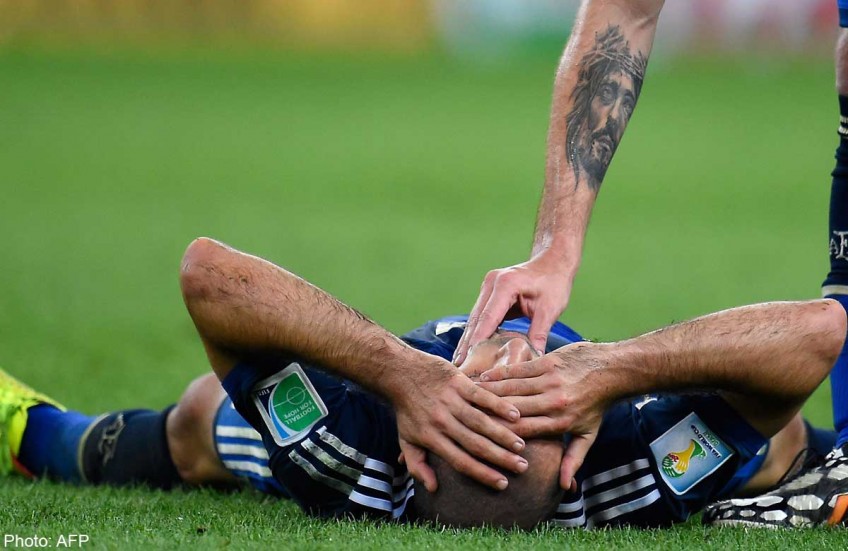 He wanted to leave as a World Cup winner, but it was not to be.

Alejandro Sabella, the outgoing Argentina coach, could not quite mastermind what would have been his country's most-satisfying triumph; the biggest trophy of all, captured in the home of their biggest rivals of all.

The South American side, weakened by 120 minutes against Holland and punished with one fewer day of rest than Germany, were beaten by Mario Goetze's spectacular 113th-minute goal.

But, could Sabella have done more?

It would be churlish to complain about his tactics.

Argentina defended deep and narrow, but that was the only sensible course of action when faced with a team as technically accomplished as Germany.

Sabella had to deny his opponents the space they thrive on and, for the most part, he succeeded.

To run at them from the start, to leave gaps behind his midfield, would have been suicidal.

Brazil could have told him that. When Argentina won back possession, they pounced, breaking with speed. Regardless of what some of his harsher critics thought, Argentina weren't parking the bus. Not unless that bus had a ramp at the back and was filled with men on motorbikes.

There was a clear intention to get out quickly, and to threaten Benedikt Hoewedes on Germany's left flank.

He had been identified as the weak link, and Argentina's best moves came on that side.

But, while the tactics were sound, the substitutions were not.

Ezequiel Lavezzi appeared to be making inroads on that flank, even though his crossing was wayward.

He was withdrawn at half-time and replaced by Sergio Aguero - a wonderful player, but someone who hasn't looked match-fit at any point in this tournament.

Gonzalo Higuain endured a nightmarish evening, missing a gifted opportunity in the first half and seeing a goal disallowed for offside.

But, was he really a worse option than the wretched Rodrigo Palacio, who spurned his own gifted opportunity late in the game?

Fernando Gago made absolutely no difference at all in midfield when he took the place of Enzo Perez. When changes needed to be made, changes that might have caused a shift in the balance of power, they came to naught.

Sabella has had a difficult World Cup.

It was widely reported that the players rebelled against his opening ploy of a back three, a change that brought immediate dividends with a win against a spirited Bosnian side.

There has been, at times, an apparent lack of respect from the players, most memorably when Lavezzi sprayed him with water on the touchline during the 3-2 win over Nigeria.

He reached the final, though it took narrow victories over Switzerland and Belgium, and then a penalty shoot-out win over the Dutch. Everything was laboured, everything was tight. It was not, at any point, a comfortable progression.

Sabella did at least have Javier Mascherano, who drove the team to the final by force of personality alone.

And then there was Lionel Messi, or at least a fleeting, shimmering glimpse of Messi, snapshots of his full talents, never sustained, but always crucial.

There were angles and X-factors that could have brought the World Cup to Argentina. But there weren't enough of them. Sabella did the right thing keeping the game tight and hoping to snatch something on the break.

But, when he needed one more angle, a clever change that could turn the game, he couldn't deliver.

On such narrow margins are World Cups won or lost.

Without a title since 1986, now Argentina have to start all over again.