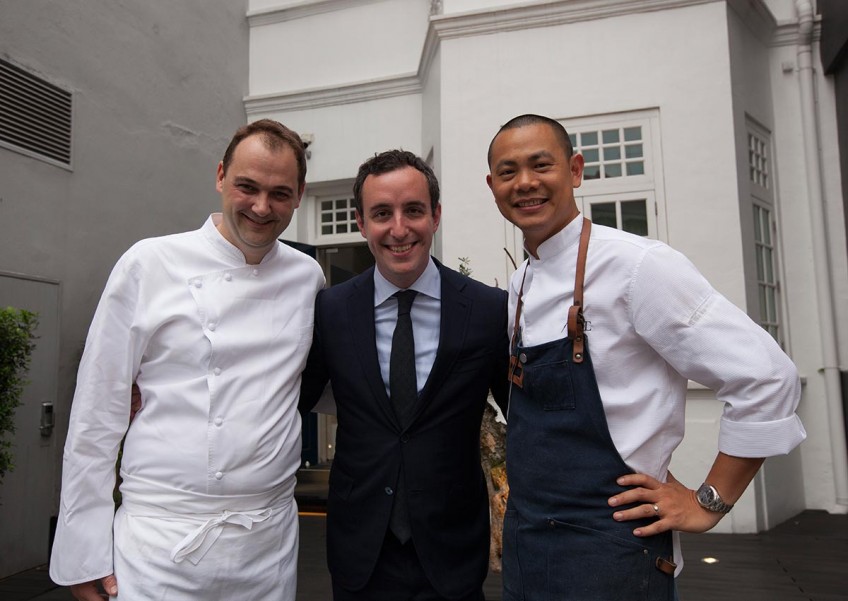 Gone are the days when you needed to save up for an air ticket to Europe or somewhere just to dine in some restaurant that you'd read so much about. Chances are that, with a little patience, that chef you're eyeing will one day make his way to Singapore to cook up a meal with one of our own chefs.

You know the era of the guest chef is firmly entrenched in the world when even heavyweights like Rene Redzepi and Heston Blumenthal can pack up their kitchen knives and fly across the world for an extended pop-up. Singapore is no exception and in the last year or so, enough big and not-so-big names have left their mark on many a local kitchen counter.

These days, it's less about the glamour and more about the experience and chance to share ideas between both foreign and local chefs as more independent restaurants get in on the act. Previously, it had always been "perceived as an expensive affair and restricted to the top echelon", observes Maria Sevillano of My Little Spanish Place. However, "increasingly, you see more chefs - good chefs who may have no titles to tout - coming together and 'jamming' in the kitchen".

Adds chef-partner Edward Esmero: "Our philosophy for My Little Spanish Place is to offer traditional Spanish cuisine and dishes, but we regularly have one-night only events such as wine dinners so we can push the boundaries."

Earlier this week, the duo hosted an eight-hands dinner with pastry chef Emily Mori from Japan, whom they had met through a friend, and connected with on-line. While the two chef-partners took care of the hot food, chef Mori worked with their own pastry chef Karyn Chung to come up with the desserts.

On the other hand, some of these foreign chefs may have titles to their name, but are lesser-known simply because their restaurants are located in more rural places that fewer people would visit. One of them is two Michelin-starred chef Philippe Vetele from the Hotel Anne de Bretagne in Angers, France. He will be in town next week to cook at the Relais & Chateaux Event at Saint Pierre with celebrity resident chef Emmanuel Stroobant.

"Bigger doesn't mean better; sometimes with the bigger names, you have certain expectations. We usually bring in chefs who are a little more niche - it's also representative of what we are like," says Saint Pierre's Edina Hong.

What matters is that both the guests and resident chefs share a similar philosophy. She explains: "If you bring someone very classical and traditional, then they come to our restaurant that's a little bit modern, it may be a little jarring. So Philippe seems to have a nice balance of tradition and modernity."

Andre Chiang of Restaurant Andre concurs, adding that inviting a guest chef without making sure their philosophy and methods align with the resident chef's could in fact be potentially dangerous to the restaurant's reputation and unfair to the diner because the meal might not have harmony.

That's why although he has been hosting collaboration dinners since he opened the restaurant in 2010, all his guest chefs are long-time friends who make the trip down on their own or even pop by for just one night during a stopover in Singapore. "For us, it's just because we want to spend time together... sometimes we don't even tell people we have a guest chef, they just find out when they arrive at Restaurant Andre," he says.

One of his most memorable collaborations was with Daniel Humm and Will Guidara - respectively the chef and general manager of the contemporary New York restaurant Eleven Madison Park - earlier this year. They have been friends with chef Chiang for a long time, but their collaboration dinner only happened because the pair were in town for the San Pellegrino's Asia's 50 Best Restaurants 2015 event.

Say chef Chiang: "I think the mindset is very different now for chefs, compared to what it was before the last generation. We don't see each other as competitors any more, we admire each other's work."

Peter Knipp of the long-running World Gourmet Summit (WGS), calls the growing trend "very encouraging" because "local talents get inspired, motivated, and adopted by all the international gastronomic heroes that come down".

The WGS has been bringing in foreign chefs for almost 20 years too, but he dismisses any talk that it has become irrelevant given the slew of food festivals and the dwindling novelty value of visiting chefs. "We are the gold standard that others try to emulate, and our numbers - which are audited - are proof of that. Plus we know our market segment and stay the course."

However, Mr Knipp adds that "this is no more simply about bringing in guest-chefs, although it's the core, but we bring experts from different fields. Remember, the diner has evolved, and expectations are now in multiples - food, service, beverage, environment, and the total experience".

For Francis Poulose, who handles programming for dining events under Sphere Exhibits such as Gusto Italiano, the trend doesn't faze him because they've always focused on resident talent. Only 10 per cent of the chefs invited to take part in their events come from overseas, and even then, it's just for the "bells and whistles", he admits. Guest chefs are "always a novelty, in the sense that they come for five days and then they disappear. But the restaurant that brings them in needs to survive for 365 days".

So it's a good thing that it's not just the diner who benefits by getting more food options and a better bang for his buck, resident chefs can also stand to gain from this exchange.

They select their visiting chefs either through recommendations from Singapore-based chefs and restaurants, or because of the foreign chef's global recognition and reputation. Each chef's visit can cost them from S$25,000 to S$40,000 (this includes fees, flights, accommodation etc). Such collaborations rarely make money, says Saint Pierre's Ms Hong. She looks for sponsors to help cover the costs of air fare and accommodation. But rather than price it high, she prefers to make it accessible at S$188 for the collaboration with chef Vetele. "If we make money, great, but the idea is not to lose money." She adds that as they engage the chef directly, "we can be more competitively priced as there are fewer middlemen to take a cut."

After all, it's not so much about making a huge profit but "about the sharing of cultures between the collaborating chefs; through their cuisine, the use of ingredients, the techniques or working styles. It is about the exposure to the home cuisine of the visiting chefs for our diners. It is also about sharing a chef's food philosophy or a culinary movement they support," says Mr Denhof.

One local chef who recently hosted a collaboration dinner under $100Gourmet is Anthony Yeoh of the rustic French restaurant Cocotte. He worked with Chef Trevor Bird from farm-to-table restaurant Fable in Vancouver.

He says that there's always something to learn from each other in a collaboration like that. "Behind the scenes, it's a chance to learn and develop on both sides how another kitchen works and gain something out of that. We cherry pick ideas and innovations that might fit well in our own kitchens."

Chef Yeoh believes the trip opened chef Bird's eyes to how difficult it is to pull off a farm-to-table concept and stick to it here in an environment like Singapore - an island where almost everything is imported. As for him personally, the biggest takeaways would be chef Bird's duck fat granola - which will be making its appearance on Cocotte's menu soon - and a friend to visit the next time he's in Canada.

It's like chef Chiang says, while this may be a trend for the industry, and people might eventually tire of the commercial side of things, it's ultimately different when it comes down to a personal level. Because as chefs like him are getting busier in this day and age, collaboration dinners are their way of staying in touch with one another. He describes: "It's like you come to my place, I go to your place. Cooking together is one thing but after that you want to see how everybody's doing. It's like inviting friends to your home."

This article was first published on October 10, 2015.
Get The Business Times for more stories.