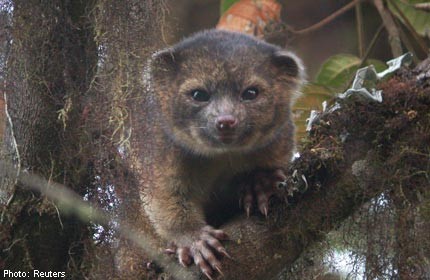 An "olinguito (Bassaricyon neblina)" in a cloud forest in South America.

WASHINGTON - A lap-sized critter that looks like a mix between a cat and a teddy bear was unveiled Thursday as the first new carnivore identified in the Western Hemisphere in 35 years.

Scientists say the olinguito has actually been around for ages, in zoos, museums and in the forests of Ecuador and Colombia, but was mistaken for its larger cousin, the olingo.

A big clue that this tree-crawling animal was something unusual was that it never wanted to breed with the olingo, experts said.

The new species, named Bassaricyon neblina, is now understood to be the smallest member of the same family as raccoons, kinkajous and olingos. With wide, round eyes and tiny claws that help it cling to branches, the olinguito can jump between trees. It feasts mainly on fruit but also eats insects and nectar.

Its discovery, which took a decade of research, is described in the August 15 edition of the open-access journal ZooKeys.

As part of the journey, scientists realised that museum specimens of the olinguito had been collected from a higher elevations - 5,000 to 9,000 feet (1,500-2,700 meters) above sea level - in the Andes Mountains than olingos were known to inhabit.

DNA analysis was also done to differentiate the olinguitos from their cousins.

The olinguito was smaller, with a differently shaped head and teeth. Its orange-brown coat was also longer and denser.

And when researchers took to the South American forests to see if the creatures were still around in the wild, they were not disappointed.

They found olinguitos in the cloud forests of the western Andes, and noted that the creatures are active at night.

The two-pound (one-kilogram) animals also appear to prefer staying in the trees and have one baby at a time instead of several.

"The cloud forests of the Andes are a world unto themselves, filled with many species found nowhere else, many of them threatened or endangered," said Kristofer Helgen, curator of mammals at the Smithsonian's National Museum of Natural History.

"We hope that the olinguito can serve as an ambassador species for the cloud forests of Ecuador and Colombia, to bring the world's attention to these critical habitats."

Helgen and his fellow researchers on the project estimate that 42 per cent of historic olinguito habitat has already been converted to agriculture or urban areas.

There are four sub-species of the olinguito, and is not being classified as endangered. Experts believe there must be many thousands of them, possibly even in Venezuela and Peru.

At least one olinguito from Colombia was exhibited in several zoos in the United States during the 1960s and 1970s, researchers said.

Back in the 1920s, a zoologist in New York was said to have found the olinguito so unusual that he thought it might be a new species, but he did not publish any research to document the discovery.

"Proving that a species exists and giving it a name is where everything starts," said Helgen.

"This is a beautiful animal, but we know so little about it. How many countries does it live in? What else can we learn about its behaviour? What do we need to do to ensure its conservation?"