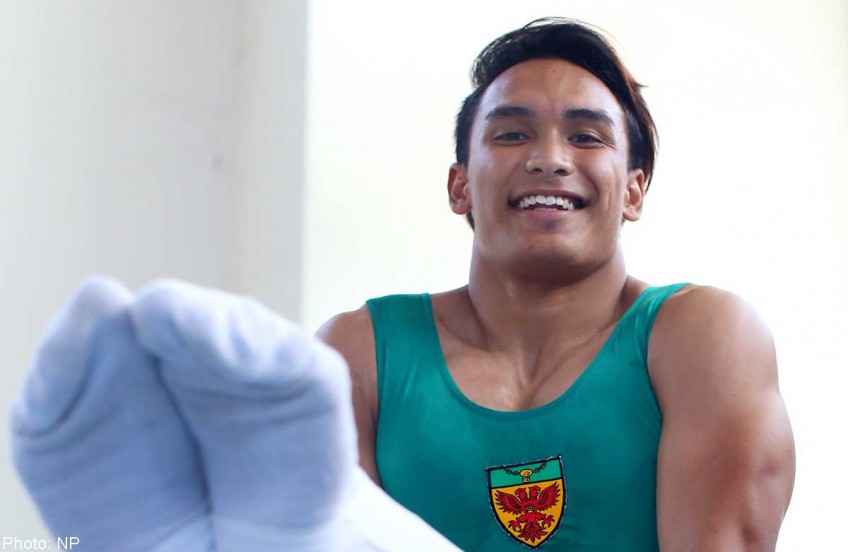 Aizat Jufrie, gymnast from Raffles Institution (RI), decided to put off his ‘A’ Levels to 2015 and concentrate on the 2014 Commonwealth Games, which will be held in Glasgow from July 23 to August 3, 2014.

Some dream of eventually wearing a SEA Games gold medal around their neck on home soil next year, while others have bold aspirations to shine at the Olympics one day.

Whatever their hopes for the future, a host of Singapore's brightest young athletes are about to begin what they hope will be a climb to the top at the Commonwealth Games.

Others may be less well-known but are out to prove they are just as deserving of the spotlight.

Take gymnast Aizat Jufrie, for instance. The Raffles Institution Year 6 student deferred his A-Levels until next year to focus on tackling the bars and steel rings in this industrial city.

The 18-year-old is on the right track, winning the vault bronze medal at April's Commonwealth Gymnastics Invitational in Glasgow.

The test event did not feature heavyweights Canada and Australia but the youngster is not afraid of facing the sport's top acrobats and contortionists.

He said: "This will give me more experience competing with international gymnasts of different sets of skills and levels.

"You learn from facing higher-level opponents, which will be good for my preparations for the 2015 SEA Games."

Fellow Commonwealth Games rookie Isabelle Li also views the competition as a learning platform, and not just from going up against skilled paddlers as the Singapore women's table tennis team bid to defend their top spot.

Spending time together with compatriot and world No. 4 Feng Tianwei in the build-up to Glasgow has broadened the 19-year-old's understanding of the game.

The Republic Polytechnic graduate said: "Feng is one of the best in the world and still so willing to share her knowledge of the game.

"She has helped analyse aspects of my game and pointed out some of the things that may happen during big competitions."

The smell of team spirit also motivates rising badminton talent Liang Xiaoyu, who is tipped to rejuvenate a sport plagued by poor results and coaching re-shuffles.

The Jiangsu native reached the semi-finals of the Asia Under-19 championships earlier this year and is fourth on the world junior rankings.

Of her Commonwealth Games role, the 18-year-old said: "It's good to play against stronger opponents as it builds my experience and capability on court, which will help in the future."

In the pool, Danny Yeo may have competed in the SEA Games and the Asian Games, but the 24-year-old's eyes light up when he talks about his debut at the latest multi-sports extravaganza.

The national 100m and 400m freestyle record holder said: "How many people our age get to travel the world and compete for our country against the best of other countries?

"It's an honour and something we don't take lightly, regardless of what our long-term goals are."