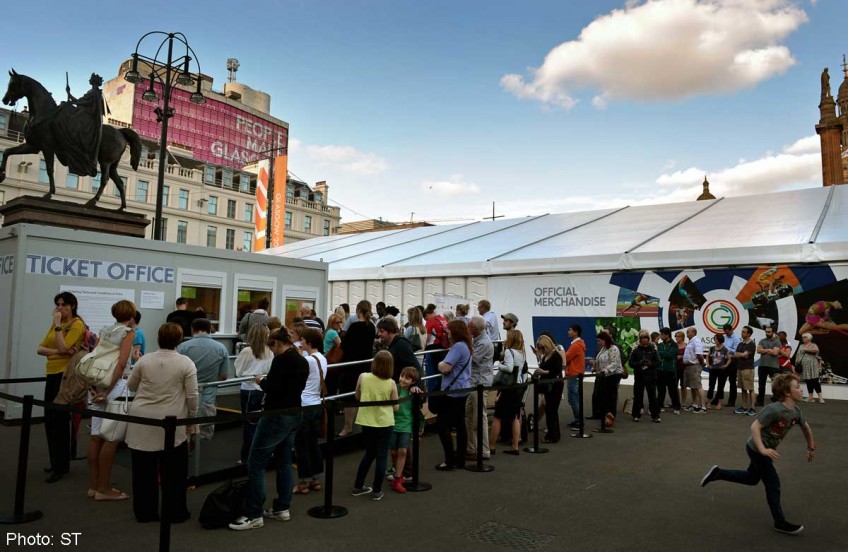 Commonwealth Games fever is running high among Glaswegians, with fans lining up patiently at George Square in order to buy tickets from a makeshift office housed in a refurbished shipping container.

Not for the first time, a vibrant crowd had gathered in picturesque George Square in the heart of Scotland's biggest city. But, even in the midst of historic government buildings and majestic statues of war heroes, the focus of all the attention was a nondescript grey container building.

In front of the Commonwealth Games ticket office, people stood in a 100m long queue, eager to get their hands on the last remaining seats for the biggest sporting event ever held in Scotland.

"Here's our chance to prove that we are the first city of the Commonwealth - us Scots are going to be backing our athletes all the way to the gold," said businessman Alan McNally, 54, who purchased a £40 (S$84) ticket for the swimming finals.

Just metres away, in a Games store the size of a football field, a steady stream of customers entered and left clutching bags of goodies, from car decals to T-shirts featuring famous Scottish athletes like swimmer Michael Jamieson.

"We hope in two weeks' time, people will know Scotland is more than just castles and the Loch Ness monster," said 23-year-old student Tina Woodward, clutching a £15 plush figure of mascot Clyde that - according to one sales staff - is flying off the shelves.

So when Scotland's First Minister Alex Salmond said yesterday that the country is being gripped by Commonwealth Games fever, he was not just bragging.

At a press conference, the country's top executive announced that 94 per cent of some one million tickets have been snapped up, helped by the fact that two-thirds of all seats are priced below £25.

Scotland's preparations have largely gone under the radar - a reflection of the smooth project as much as the global sporting radar being tuned in to Brazil for the World Cup for much of the year.

Although a vomiting bug broke out at the athletes' village last week, only workers appear to have been affected.

The 1986 Edinburgh Games left the Scottish capital in financial turmoil after 32 of 59 teams boycotted the event over the British government's ties with apartheid-era South Africa.

Glasgow's legacy, however, seems more secure. Officials said over 4,000 jobs were created in conjunction with their hosting of the quadrennial event, while half of the £400 million worth of Games contracts were awarded to Glasgow-based firms.

In an apparent jibe at London going over budget to stage the 2012 Olympics, Mr Salmond said: "The Games will validate that Scotland has the ability to host major international events.

"We are within budget - not many other hosts of big sporting competitions, especially one close by, can say that."