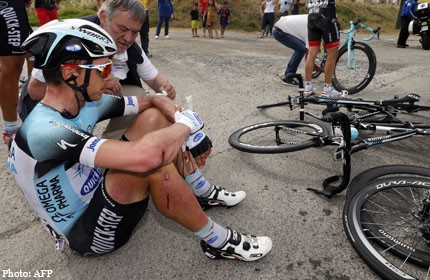 SAINT-MALO, France - A shake-up in the general classification could be on the cards in Wednesday's 11th stage of the Tour de France, although Germany's Tony Martin is the outstanding favourite to win on the individual time trial.

Omega-Pharma rider Martin is the reigning world champion in the discipline and will be determined to show just why he is the best in the business on the 33-kilometre ride from Avranches to Mont Saint-Michel, the tiny island and UNESCO World Heritage Site that is one of France's most famous landmarks.

"I'm feeling good and I expect to win. If I don't, I will be really disappointed," said the German, who appears to have recovered sufficiently from nasty injuries suffered in a crash on stage one in Corsica.

Martin is due off the ramp at 1036 GMT, before all eyes turn to the battle in the general classification later in the day.

Current yellow jersey wearer Chris Froome may still be feeling a little fatigued after his weekend exertions in the Pyrenees but he will fancy his chances of doing well in the time trial, in contrast to his main rivals.

Froome starts the day 1min 25sec ahead of Spain's Alejandro Valverde in the overall standings, while his expected main rival, Alberto Contador, is sixth at 1min 51sec.

The Kenyan-born Briton, who will be last off the ramp at 1454 GMT, is hoping to maintain his advantage, if not extend it.

"The time trial will be a good opportunity for the general classification. I will hope to keep the advantage I have already," he said.

This will be only the second time that a Tour stage has finished at Mont Saint-Michel, with the only previous occasion coming in 1990.