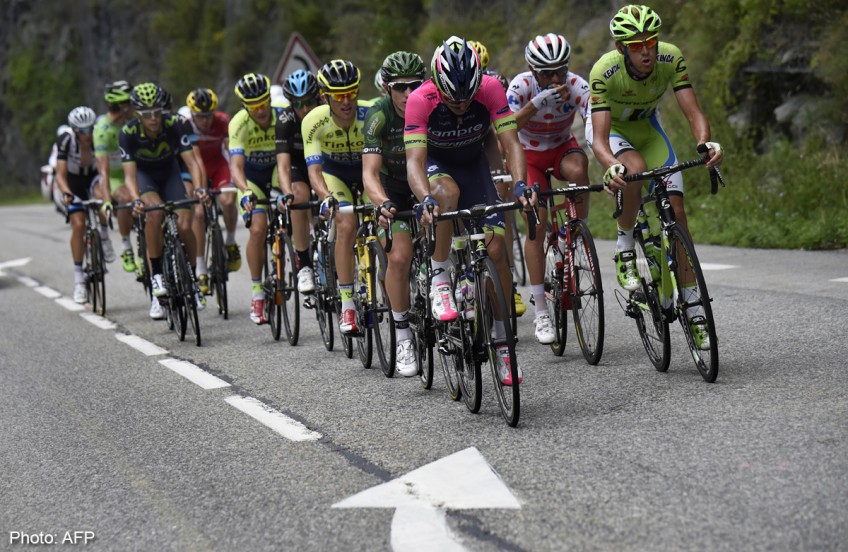 Cyclists ride in a breakaway during the 177km 14th stage of the 101st edition of the Tour de France.

TALLARD, France - Tour de France sprinters were licking their wounds and looking to the positives ahead of Sunday's 222km stage 15 from Tallard to Nimes.

Following a week of mountainous and hilly stages, the sprinters have a rare chance to shine ahead of next Sunday's finale on the Champs Elysees in Paris.

The last Alpine stages left their mark, though, with German Marcel Kittel, winner of three of the opening four stages at this Tour, crashing on Friday.

He then had to contend with sticky tarmac on the gruelling hors category climb at the end of that stage.

He wrote on Twitter on Friday: "I'm okay and made it to the finish. Loved the sticky tarmac on the way up... #not!!!" He was in better spirits on Saturday, remarking on and posting pictures of the home comforts his Giant-Shimano team have been providing.

"We have now a chair next to our coffee machine to avoid standing...," he added on Twitter, posting a picture of the said chair.

Keeping their spirits up through the mountains has been an important exercise for the sprinters while waiting for a chance such as Sunday's largely flat stage.

Following Saturday's Alpine trek, another German, Andre Greipel, posted a photo of himself on Twitter looking quite exhausted with the caption: "If you are not a climber you are looking like that." Neither of them suffered quite like Frenchman Arnaud Demare, though, who had to make a couple of visits to his team's camper van toilet during Saturday's stage due to stomach troubles.

"In a bicycle race there are no changing rooms, nor half-time... So we do what we can with all the fans around! That's the Tour!" he wrote on Twitter.

"When I was young, the Tour de France represented the holidays! But that was before!" The first half of Sunday's stage is relatively bumpy, although there are no serious climbs so it will suit a breakaway group.

However, the last 80km are almost entirely pan flat and there's little chance the sprinters teams will allow the breakaway to get anywhere near the end without cranking up the pace and setting up a bunch finish.

Kittel was the star of the early stages but he has not since managed to arrive at the finish in the hunt while Greipel and Norway's Alexander Kristoff have managed to win sprints.

Sunday's stage will also be targeted once again by green jersey wearer Peter Sagan, whose lead in that competition means he is almost assured of claiming the jersey for a third straight year in Paris.

He has finished second four times already and fourth three times, but is yet to win a stage on this Tour.

He complained following his narrow defeat to Kristoff on Thursday that he had been penalised by being in the hunt on every stage, making him more tired than his sprint rivals.

But after two days of pedalling tempo in the Alps, Sagan should be refreshed for the battle ahead, although in a regular flat finish he doesn't have the power to beat a Kittel or a Greipel.

Yet his determination has not wavered.

"Since the beginning I did my best in all the stages suited for me and this made me more tired compared to other riders," he said after Thursday's stage.

"My goal now is to pass the mountain stages, save energy as much as possible and try again to win in the last week of the race." As for the general classification contenders, Sunday's stage will be about surveillance.

There is the possibility of strong crosswinds along the south coast and if the pace cranks up as the sprinters' teams try to control the end, there is always the risk of a split in the peloton.

Those caught behind risk losing not seconds but minutes.