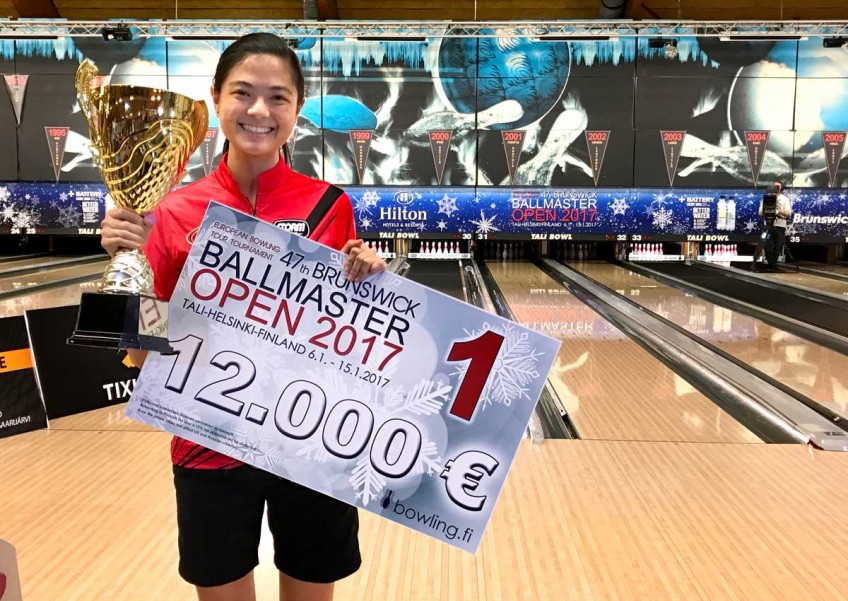 For close to a decade, national bowler Daphne Tan watched on as her illustrious team-mates in the high-flying women's team claim personal accolades and individual titles.

Even as she publicly toasted to their successes, she also often privately questioned when her own endeavours for the top of the podium would be rewarded.

It was due reward, not simply for the champion's cheque of €12,000 (S$18,200). Daphne is just the third woman to win the event - a mixed tournament contested by both men and women - widely considered to be Europe's most prestigious bowling trophy.

"It's been a long time coming," she told The Straits Times over the phone from Finland yesterday. "I've definitely questioned myself many times. I guess it was worth the wait if my first one is a good one."

Daphne, whose elder sister Cherie is also a national bowler and competed in Helsinki too, admitted the going has been tough. Especially so, when one is training and competing alongside team-mates who are world champions, Major and tour winners.

Said Daphne: "It's a very happy thing, yet also sad. You know you're part of this team that's amazing and we've achieved so much together. At some point we started to get individual wins, but I wasn't a part of that yet.

"You ask yourself when is it going to be your turn," added Daphne, who fell short twice at the Malaysian Open in 2007 and 2014, when she finished runner-up in both tournaments.

Even though countless disappointments have led to thoughts of quitting, Daphne said she was always too stubborn to give up.

For someone who said she has always struggled for self-belief, a new focus on her physical game since the end of last year has led to greater confidence.

"Shayna (Ng) and my sister have been very helpful to my game and my team-mates have never made me feel like I was inferior," she said.

"I'm very thankful for my team-mates, coaches and the Singapore Sports Institute because even when I didn't quite believe in myself, they always had faith in me."

Helsinki also proved to be a confidence booster for Jazreel Tan, who won the Masters event at the 2015 SEA Games but said she has been struggling otherwise. Her last professional title came at the Lubbock Sports Open in July 2015.

"I may be doing okay in tournaments, but never enough to win or get to the podium. When you don't win, it doesn't matter whether you're bowling well or not," said the 27-year-old, who added she has been having trouble with her physical game since she won four medals, including a gold, at the 2014 Asian Games.

"There's still some regrets because I came so close yet so far (to a win), but if anyone had told me at the beginning of this event that I would be on the podium, I'd probably think they were crazy.

"It's a step in a right direction, especially since this is an important year."

Besides the SEA Games in August, there is also the world championships in Kuwait in December.

Said Jazreel: "My game is slowly coming back together so hopefully I can keep up with that."

This article was first published on Jan 17, 2017.
Get a copy of The Straits Times or go to straitstimes.com for more stories.